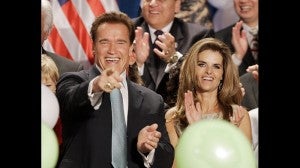 LOS ANGELES—Maria Shriver stood by Arnold Schwarzenegger when he ran for California’s governorship in 2003, even after several women accused him of lecherous behavior.

On Friday, 25 years after their fairytale wedding on Cape Cod, she filed for divorce.

The former television journalist and Kennedy family heiress cited irreconcilable differences but offered no additional details about the breakup.

Shriver did not list a date when the couple separated, although they announced they had done so on May 9.

A week later, the former California governor admitted he fathered a child with a member of his household staff years ago.

The filing, which Shriver signed nearly two weeks ago, signals an end to a union that brought together a rising film action star and a princess of the Kennedy clan, herself an up-and-coming network newscaster.

Shriver’s filing does not indicate the couple had a premarital agreement.

That means Schwarzenegger’s earnings from a career as a Hollywood megastar, which allowed him to forgo a salary as governor and commute by private jet to Sacramento, likely will be evenly divided with his estranged wife.

Shriver is seeking spousal support but the amount will be determined later, either through a settlement or by a judge. The divorce is expected to be handled mostly behind closed doors.

Economic disclosure forms filed when Schwarzenegger left as California governor in January show he has interests in at least eight entities each worth $1 million or more. An exact tally of his wealth is impossible to calculate.

The forms also show he still retains rights to intellectual property from his days as a fitness guru and movie star.

Several of Schwarzenegger’s biggest hits, including “Predator,” “True Lies” and the blockbuster sequel “Terminator 2” were made during his marriage to Shriver.

Shriver was an award-winning television journalist but put her career on hold when Schwarzenegger ran for governor.

Her holdings are more modest but are listed in the disclosure as being worth more than $1 million. She is a member of the Kennedy family and a beneficiary of some of its assets in addition to owning rights and royalties from her work as an author, the filings show.

In recent months, she has appeared in videos posted on YouTube in which she talks about stress in her life, the weight of expectations and the search for faith in a troubled world.

Shriver and Schwarzenegger have four children together, including two sons who are still minors. Shriver’s petition seeks joint custody of the teens, who are 17 and 13.

Shriver publicly supported her husband when he ran for elected office, even after the Los Angeles Times reported accusations by several women that they had been groped by the movie star.

Schwarzenegger said he “behaved badly sometimes” and was twice elected to the governorship.

He failed to fix the state’s chronic budget problems and left office in January with an eye toward environmental projects and a return to the big screen.

One of his projects was an animated collaboration with comic book legend Stan Lee titled “The Governator,” but the project was shelved after Schwarzenegger admitted fathering the child out of wedlock. He has disappeared from the public eye in recent weeks and has not announced any plans to resume acting. AP