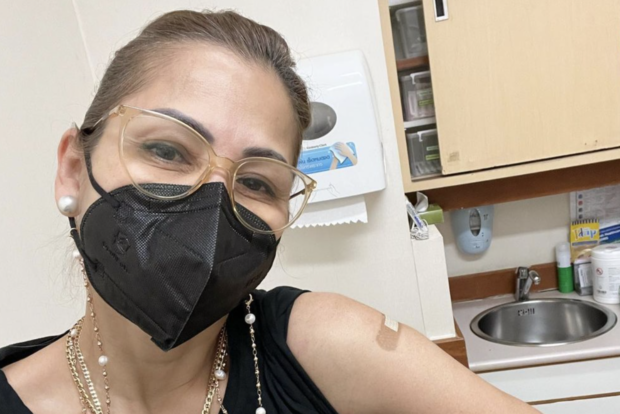 Maritoni Fernandez has completed all three doses of her Dengvaxia vaccine in Thailand, as she revealed she is at “high risk for fatality” for dengue.

The actress showed off the bandage on her arm after taking the shot, as well as the box containing the Dengvaxia she had received, via her Instagram page yesterday, Oct. 25. Fernandez received her vaccine at Samitivej Virtual Hospital in Thailand.

Fernandez explained that her medical history with dengue was the reason why she opted to complete all three doses of Dengvaxia.

“Got hemorrhagic dengue a few years back and was told that I’m high risk for fatality if I get it again so since we can’t get Dengvaxia in Manila anymore, I’ve had the perfect excuse to come to Bangkok every 6 months! Plus I get to see all my Thai ladies whom I love so much,” she told fans.

The Dengvaxia vaccine was the subject of controversy after its manufacturer, Sanofi Pasteur, released results of its long-term, follow-up study in 2017. The study found that Dengvaxia may cause an increased risk to those who received it without prior history of dengue infection.

Dr. Erwin Erfe of the Public Attorney’s Office Forensic Laboratory stood firm on his team’s findings that the Dengvaxia was linked to the death of 105 people, after his team performed autopsies on them.

The Department of Health (DOH) then stated in January 2019 that no death had been confirmed to be directly caused by the vaccine. Despite this, the department did not lift the ban on the use of Dengvaxia in the Philippines, as former Health Secretary Francisco Duque III said the ban had nothing to do with the vaccine’s efficacy.

However, experts have been calling on the government since July to review the benefits of the Dengvaxia vaccine as dengue cases spiked in the country.  /ra