From his blog, “Choking on My Adobo” 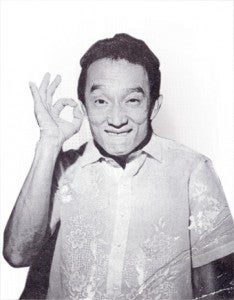 We all love Dolphy because for decades … nay, generations … he never ceased giving us laughter.

What makes him so different—and so loved? It certainly is not his reputation as a Lothario, nor the sheer power of his comedic talent.

It is his humanity and humility.

We are in tears as he fights for his life because we cannot imagine being without that single icon whose very image embodies all of what we know as Philippine comedy.

He was not as privileged at the start of his career as many of today’s “stars,” who became overnight sensations because of availability, accessibility and the power of media.

Dolphy rose from the ranks. He honed his talents through years of hard work, alongside other legends  in the annals of local entertainment.

To trace the history of Dolphy’s career is to create a road map of Philippine entertainment from the 20th to the early 21st centuries.

From a bit player on stage shows called bodabil—where the likes of Mary Walter, Bayani Casimiro, Katy de la Cruz, German Moreno, Pugo, Tugo, Lopito and Patsy found their footing in the world of music, applause and laughter—Dolphy evolved into a personification of the Filipino immortalized by stage, TV and film.

Who could forget the years of amusement that Ading Fernando’s seminal Filipino family in the persons of John Puruntong, his wife Marsha (played by the late Nida Blanca) and their children Rolly (his real son Rolly Quizon) and Shirley (Maricel Soriano) provided?

For the younger generation, Dolphy is Kevin Cosme of “Home Along Da Riles.” This character offered the same image of the Pinoy tatay who dealt with fate with an open heart, and who never lost his humanity amid the foibles and complexities of life.

One thing notable about Dolphy’s seminal portrayals and characters is that they are funny in a Chaplin-esque way. The vulnerability of his portrayal makes him lovable.

He is never harsh or impolite, and does not resort to vulgarity to win his laughs. He is a gentleman as much as he is a comedian.

Definitely not a proponent of comedy as it is understood today (founded on profanity, insult and macabre forms of aggression), Dolphy is a master of timing, wit, even underacting.

Remember Facifica Falayfay or Fefita Fofonggay? A closer look would reveal that Dolphy never assumed a condescending or insulting attitude toward these characters he played.

In the movie “Ang Tatay Kong Nanay” (directed by another legend of Philippine cinema, Lino Brocka), where he costarred with then child superstar Niño Muhlach, the master comic proved that his sensibilities and sensitivities could elicit tears from audiences as well. More than anything else, Dolphy is an artist.

During his “Buhay Artista” days in the old ABS-CBN, Dolphy displayed smooth moves on the dance floor and perfect chemistry with then sidekick Panchito Alba.

Dolphy is loved by colleagues because of his legendary generosity—but more so for his endearing ability to listen to others. Despite his stature, he did not lose his sense of reality.  He is always the first to lend a helping hand even before it is sought. He is known for lavishing people with what is within his reach.

I have not had the chance to work with Dolphy as a director, but I hold dearest one opportunity I had to work for him as a writer—for the teleplay “Love, Daddy,” directed by Peque Gallaga. I wrote about the pain, agony and frustrations of a newly retired man (my father) who had worked all his life and was now compelled to stay home and feel absolutely useless.

I never had the chance to tell Mang Dolphy how happy he unwittingly made my father for taking on the role.

Like many colleagues, I am now very afraid—terrified, in fact—at the prospect of being left behind by a man who many of us consider as our father, in one way or another.

Rodolfo Quizon may not have been given the title national artist yet, but to a great number of Filipinos, this man who makes us laugh is a national treasure.