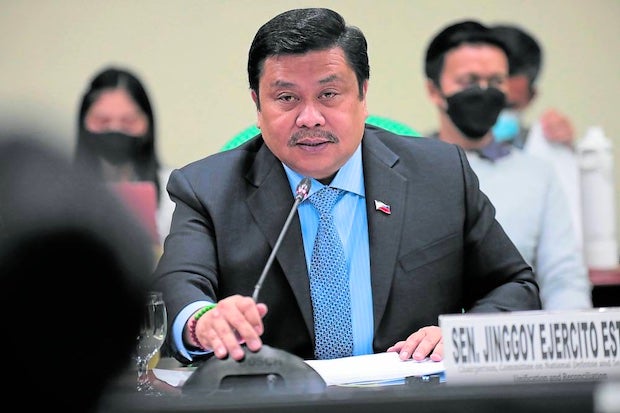 MANILA, Philippines — Sen. Jinggoy Estrada on Wednesday backpedaled on his comments about Korean telenovelas a day after he floated the idea of banning them, whipping up a firestorm in the K-drama fandom in the process.

Estrada clarified that his statement should not be taken to mean he was against Korean telenovelas, but that he only wished Filipinos supported local movies with the same zealousness as they do for K-dramas.

“My statement stems from the frustration that while we are only too eager and willing to celebrate South Korea’s entertainment industry, we have sadly allowed our own to deteriorate because of the lack of support from the moviegoing public,” he said in a statement.

Estrada found himself on the receiving end of scathing comments from netizens after he admitted at the Senate budget briefing for the Film Development Council of the Philippines (FDCP) that he considered sponsoring a bill that would ban foreign telenovelas in the country.

“First of all, I am against (their airing in the country) because it is my observation that if we keep showing their shows, they will continue to capture the admiration of Filipinos, which will lead to lost jobs and livelihood for our local artists,” he said on Tuesday.

“In fact, it has crossed my mind to ban these foreign telenovelas, so that our local artists, who have shown great acting, will be the only ones shown in the country,” he added.

Estrada, who comes from a family of actors-turned-politicians, made the comment after Sen. Robinhood Padilla, a former actor, lamented the low state of the country’s movie industry.

Padilla said he and the other members of the Senate’s “Famous Four” — former actors Estrada, Ramon “Bong” Revilla Jr. and Lito Lapid — were looking at ways to revive the ailing entertainment industry that further slumped due to the pandemic and viewers’ rising preference to streaming videos.

“We keep looking at the mirror and are convinced that we are still better-looking than South Korean actors. But why do you think Filipinos prefer watching Korean films over local movies?” Padilla asked FDCP chair Tirso Cruz III.

Years in the making

Cruz said the Korean movie industry may be popular, but their success is an offshoot of their “many years of preparation and discipline” and the support they received from the government and private sector.

“We believe that Filipinos are better actors, but we may have been left behind in technology and (the degree of) preparation,” he said.

Estrada said Filipino TV networks chose to air Korean telenovelas as purchasing the rights to air them was cheaper than producing their own movies.

But on Wednesday, he clarified that he has nothing against Korean shows but asked for support for homegrown movies and their artists, whose talents, he said, are world-class.

“I have nothing against South Korea’s successes in entertainment and admittedly, we have much to learn from them. But let us not forget and take for granted the toils and the works of art of our fellow Filipinos,” he said.