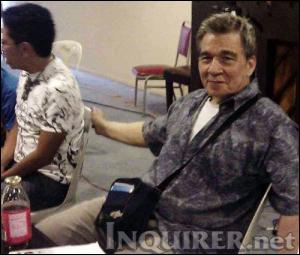 Award-winning director, actor, playwright Mario O’Hara died of cardiac arrest between 10:30 a.m. and 11 a.m. on Tuesday at the San Juan de Dios Hospital in Pasay City. He was 68.

According to his brother Jerry, O’Hara’s heart attack was a complication of his acute leukemia, which was diagnosed only this month.

“My brother’s cardiologist already warned me that his low hemoglobin count could lead to this,” Jerry told the Inquirer in a phone interview. “He had been conscious. He still looked healthy despite his illness. His heart simply gave up.”

In and out of hospital

Jerry said O’Hara been in and out of the hospital for two months. He was first brought there in May due to pneumonia. “This triggered a mild heart attack. He had been confined for three weeks,” he said in an interview on June 20.

O’Hara went home for a week, until his his condition “got worse” and had to be taken back to the hospital. “He felt weak. He lost his appetite and the small amount of food he ate, he vomited,” Jerry recalled. It was around this time that O’Hara’s leukemia had been diagnosed.

“His body rejected medicine. His creatinine level shot up. This caused damage to his kidneys and liver,” the brother related. “Doctors also said his potassium level was high and that this could cause for his heart to stop any time.”

O’Hara underwent his first chemotherapy session on June 20. The following day, Jerry sent this message to the Inquirer: “He is responding very well to chemo.”

Jerry said O’Hara had initially refused cancer treatment and suffered from bouts of depression. “His doctors had told him, ‘give medicine a chance to work on you,’ but my brother replied, ‘doon (death) din naman ang uwi ko.’ He had bouts of depression. His family tried to encourage him, to keep him fighting.”

On Tuesday, Jerry said: “My brother fought for his life. He stood his ground. He even managed to fight his depression. We made some of his closest friends visit him to cheer him up. The day before he died, he even ate a big serving of his favorite sapin-sapin.”

O’Hara was a native of Zamboanga. He collaborated with the late National Artist for Film Lino Brocka in the 1970s in films such as “Insiang” and “Tinimbang Ka Ngunit Kulang (You’ve Been Weight But Found Wanting),” where he made his first breakthrough performance as a leper. He also co-wrote the scripts of these films which are now considered classics not only in the Philippines but in world cinema.

In 2004, he made the award-winning neo-realist film “Babae Sa Breakwater.”

Though he’s been invited to direct soap operas and mainstream films many times, O’ Hara was consistent in refusing offers from major studios, citing the creative limitations set by network executives.

The only exception he made was in 2011, when he agreed to direct “Sa Ngalan ng Ina,” a soap opera for TV5, which welcomed the return to television of his friend, the US-based entertainment icon, Nora Aunor.

Besides directing indie films even before the term was invented, O’Hara had been active in theatre as playwright, actor and director, collaborating with groups like Tanghalang Pilipino and the Philippine Educational Theater Association.

He was so busy on the live stage there were instances when he was acting for a certain group, his play was being staged by another. One example was in September 2005, when his full-length award winning musical, “Ang Palasyo Ni Valentin,” was staged by PETA for the formal opening of its new theatre center in Quezon City. The same month, O’ Hara was one of the lead actors in Tanghalang Pilipino’s “Ang Pokpok Ng Ohio,” a Filipino adaptation of “The Whore from Ohio” by Israeli playwright Hanoch Levin.

Up to his dying days, O’ Hara continued to write for theater.

O’ Hara’s new musical titled “Stageshow,” which tackles the dying days of the “bodabil (vaudeville),” a popular form of entertainment before WWII, will be staged by TP in October this year under the direction of CCP’s artistic director Chris Millado.

O’ Hara, like the ailing actor-comedian Dolphy, has been nominated and by-passed for the National Artist Award.

Jerry said O’Hara had been working on a film with Aunor before he died—a historical piece on the hero and first Ilocano insurgent leader Gabriela Silang.

O’Hara’s colleagues took to the social networking sites Facebook and Twitter to pay their respects. “Working with you has been one of the greatest and most memorable moments of my Life, as an actor, but most importantly, as a human being,” said Lance Raymundo, who played the role of General Emilio Aguinaldo in “Ang Paglilitis.” “Thanks for treating me like a family member and for always being generous with your guidance and good advice. The love and friendship that the whole O’Hara family has shown me is something I will treasure forever. You will live forever be in the hearts and minds of all Filipinos.”

Alfred Vargas, who played Bonifacio, said he appreciated the fact that “of all the actors who auditioned for the role, he picked me. He said there’s no other actor fit for the role but me. Direk believed in me and for that, I’m forever grateful. We just lost one of the most brilliant Filipino directors of all time.”

Actress Janice de Belen said she felt “truly sad that my first director, whom I love dearly,” has passed away. “Condolences to his family. I love direk, too.” With a report from Bayani San Diego, Philippine Daily Inquirer