Here are the four leading ladies of ‘Mano Po Legacy: The Flower Sisters’ 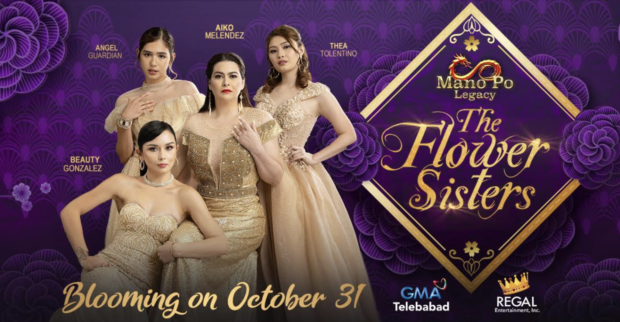 The major stars in movies and television have aligned with “Mano Po Legacy: The Flower Sisters” from Regal Entertainment, Inc. and GMA Network. This occurrence in showbiz rarely happens for a television series, much less when it premieres o

n free television, beginning on October 31, 2022, on GMA Network. That alone is something to be proud of because, besides the all-star cast, some of the most experienced people in the business are working behind the scenes as directors, writers, and producers. This is going to be a great family-drama themed series that continues the family drama theme set by the first “Mano Po Legacy,” which is the franchise’s gold standard and has become the measuring stick since then.

It is almost like having a chocolate bar with peanuts, nougat, caramel, chocolate, and wafers—literally, the works. I am sure I have made my point as thoroughly as possible about why this upcoming series is all in one.

As I watched the plug-in trailer for this, one by one, the four actresses who will portray “The Flower Sisters” gave their on-screen names and an overview of their personality traits and backstory. I felt something. I got a little shiver because the way they were introduced, their short monologues, and how they played their roles made them seem royal, wealthy, and important. It also had a cinematic feel.

It leaves a strong impression on the audience. Indeed, the overall mentality would be, “I’ve got to watch this!”

The names alone of those who are involved and included in “Mano Po Legacy: The Flower Sisters” mean that both entertainment industry giants mean business in their casting choices, from the main cast to the supporting actors. They held nothing back here, and nor should they, because if you want to put out a must-see television series, then you bring in the best, which they have done here. They made the main cast up of four women: the three main cast members—Aiko Melendez, a well-known drama powerhouse; Beauty Gonzalez, a classy but sassy mature actress; the two younger main cast members, whom I call the “One-two punch combo”: Thea Tolentino, whom I have dubbed as the best young natural kontrabida of GMA Network; and Angel Guardian, a feisty, tough, but beautiful actress with many talents—complete the cast of the “Flower Sisters”.

Let us hear from “The Flower Sisters” themselves, Aiko Melendez, Beauty Gonzalez, Thea Tolentino, and Angel Guardian, as I could ask one important question and not a question that requires only a one-worded answer, as the host ridiculously did with my originally sent question, as some actresses were puzzled and confused how they could answer my question that required only a one-worded answer, as the host ridiculously did with my question in the grand press conference for “Mano Po Legacy: The Flower Sisters.” I get it; you’re a comedian, and a very good one at that. In fact, I am one of your fans, but work is work, and I take pride in my work. There is a time to be serious. Let’s respect the actresses and the industry because this is a major event for their respective careers and a milestone in television. Below is the original question I sent to be asked of the four actresses.

MY ORIGINAL QUESTION – On a personal level, what makes you most proud and happy about being selected to be part of Regal’s “Crown Jewel” production, namely: Mano Po Legacy: The Flower Sisters?

Aiko Melendez – In one word? Good. When you say Mano Po, we all know Regal and GMA are responsible for this, and we all know they would not have reached Mano Po 3 if it wasn’t good. That says everything.

Thea Tolentino – Of course, I am honored because ever since I started here at GMA, all the shows that I have been a part of are beautiful. In particular, being included in the new Mano Po Legacy is such an honor because it is so beautiful and extravagant. I am really thrilled and lucky that they chose me. This is going to differ from the usual roles I portray. I am thankful that they have entrusted me with this.

Beauty Gonzalez – It is a legacy! And I am very honored to be a part of this. I grew up watching the Mano Po movies and am honored to be a part of this legacy. Thank you very much. Because it is to be a part of history. This is part of my bucket list. So, thank you very much, Ms. Roselle Monteverde and Sir Joey Abacan. But also, another item to be checked off my bucket list is to work with Ms. Aiko Melendez, because before we go out, we have common friends, and she is my idol. I mean, as an actress, now a counselor, a good partner, and a good mom. I want to be like her. And it is about being able to work with her. So, thank you so much for making my dreams come true.

Angel Guardian – I’m just very grateful that they included me in this cast. The name of my character is beautiful and is “Iris.” I will not fail because I know there will be a lot of expectations on me, and I will certainly learn a lot from this experience of being included as one of the main cast members in “Mano Po Legacy: The Flower Sisters.”

Watch out for ‘Mano Po Legacy: The Flower Sisters’