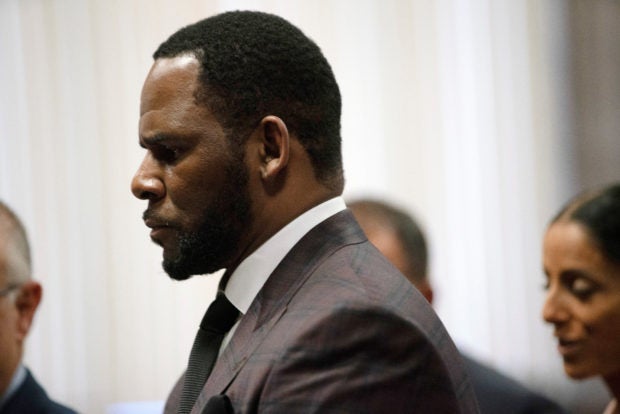 NEW YORK — R. Kelly, the multiplatinum R&B singer convicted twice this year of sex crimes, will be required to pay at least $300,000 (P17.7 million) in restitution to some of his victims, a federal judge said on Wednesday.

The money will compensate two women, known as Jane and Stephanie, for the costs of therapy and herpes treatment, United States district judge Ann Donnelly said at a hearing in Brooklyn.

That figure is likely to rise after prosecutors recalculate the cost of medication for Stephanie.

Donnelly denied prosecutors’ requests to compensate Jane for lost income, and provide any compensation to a third victim known as Sonja.

Kelly attended the hearing via Zoom from a federal prison in Chicago.

Donnelly sentenced Kelly in June to 30 years in prison, after a jury convicted him of racketeering and other charges.

Prosecutors said the 55-year-old Kelly exploited his stardom and wealth over more than two decades to lure women and underage girls into his orbit for sex.

The monthlong trial amplified accusations that had dogged the singer of the Grammy-winning hit “I Believe I Can Fly.”

Kelly was also convicted last month in Chicago on separate charges of child pornography and luring underage girls for sex.

He is awaiting sentencing in that case, and also faces various state charges in Illinois and Minnesota.

Kelly, whose full name is Robert Sylvester Kelly, is among the most prominent people convicted of sexual misbehavior during the #MeToo movement against such conduct by prominent men. JB