Can ‘Crash Landing on You’ musical repeat success of original TV drama? 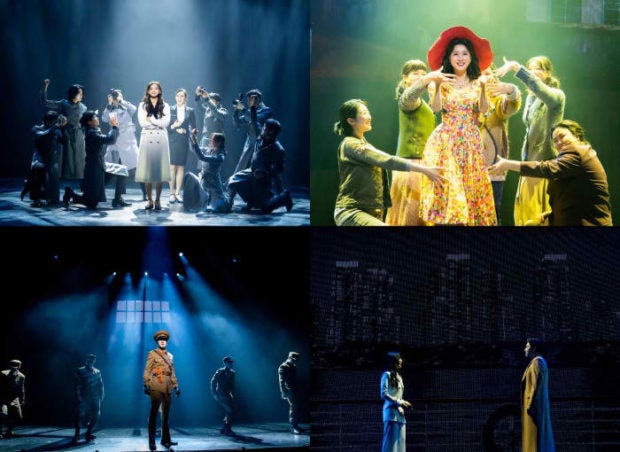 Musical “Crash Landing on You” Image: Show On Company via The Korea Herald

The musical version of “Crash Landing On You,” based on the 2019 megahit TV series of the same title, was unveiled Friday.

The musical features familiar names from both the TV and theater scenes in the iconic lead roles of Ri Jung-hyuk and Yoon Se-ri. Lee Jang-woo, Lee Kyu-hyung and Min Woo-hyuk take the role of Ri, the North Korean officer, while Im Hye-young, Kim Ryeo-won and Na Ha-na portray Yoon, the heiress to a South Korean conglomerate.

The actors and the creative team alike said they felt pressured by the enormous popularity and international recognition of the TV drama series, which starred actors Hyun Bin and Son Ye-jin in the lead roles, but they focused on doing their best.

“I was under a lot of pressure. Since Hyun Bin is synonymous with ‘Crash Landing on You,’ I thought it would be better to express a modest North Korean man in my own way rather than trying to overcome Hyun Bin,” Lee Jang-woo told reporters on Tuesday.

While acknowledging similar pressure, Lee Kyu-hyung and Lim Hye-young pointed out that the format is different, and that they focus on creating their own version within the stage form.

“It is almost impossible to express a 24-hour feature drama in less than three hours. I thought a lot about how to expand my emotions in every scene,” Lee Kyu-hyung said.

“It’s not that I didn’t feel pressured, but that didn’t interfere with my work. I thought a lot about the points that could show Yoon Se-ri’s inner self in a three-hour journey,” Lim said.

For the creative team, bringing a TV show to the stage was a challenge.

Park Ji-hye, who helmed the musical stage adaptation said some of the iconic scenes from the TV series, such as Yoon Se-ri crashing into Ri Jung-hyuk in North Korean territory in a paragliding accident, could not be re-created satisfactorily.

“I really wanted to save the crash landing scene, but due to safety concerns, I couldn’t create the feeling of flying across the sky,” Park said. Park previously directed musicals “Maybe Happy Ending” and “Gentleman’s Guide.”

Music director Lee Sang-hoon, who is best known for drama series like “Signal” and “Hospital Playlist,” created the music for the musical, which is his first engagement with a commercial musical.

“In TV dramas, music is the background, but for stage, music is a leading part through which story and emotions are conveyed, so I felt they are very different genres,” Lee said.

The musical is testing the waters in the domestic market first, but the production team hopes to attract overseas fans, as the TV version has done.

“It’s a love story between a man and a woman that bloomed in our special situation of division, and I think it can appeal to audiences all over the world,” the director added.

The musical is part of a trend of hit TV shows being adapted into other formats. Several TV dramas, including the 1994 medical thriller “M,” “Another Miss Oh,” based on the 2016 romantic comedy of the same name, and “Hotel Del Luna,” another hit series from 2019, are being created into musicals.

“Crash Landing on You” runs through Nov. 12 at Coex Artium in Seoul. JB