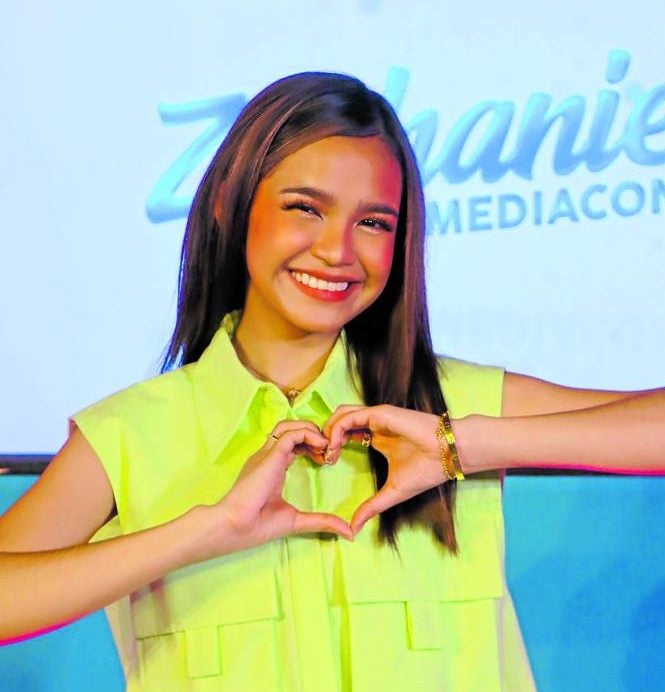 While the prospect of acting used to intimidate her, Zephanie said she is now open to doing soap operas or similar projects should the opportunity arise in the future.

“I have to learn when it comes to acting. I’m a shy person, so I was afraid of trying. But now that I’m able to meet different actors, I find that field very interesting,” the young singer said at a press conference to mark her sixth month as a talent of Sparkle—GMA 7’s talent management arm.

Zephanie, who won the first season of the singing contest “Idol Philippines” in 2019, recently took acting workshops— just so she could be ready if her home network offers her a role. “There are no talks yet about a teleserye, but I’m open to that possibility. And if I do get offers, I will wholeheartedly take them,” she said.

Does she already have a leading man in mind? “That’s something I haven’t thought of yet,” she admitted. “But whoever gets paired with me, I will make sure that we get along well and do my best working with him.”

Since transferring to the Kapuso network last March, the 19-year-old singer has lent her voice to the teleserye theme songs, “Tunay na Minamahal” and “Kaagapay,” which have been used for the shows “Apoy sa Langit” and “Bolera,” respectively. Meanwhile, her latest single, “Luv Is”—a collaboration with the P-pop group VXON—will be used for the upcoming series “Luv Is: Caught In His Arms.”

Zephanie is also a mainstay in the weekly variety program “All-Out Sundays” (AOS) and the segment “Queendom,” where she shares the stage with some of the network’s homegrown divas.

“I’m thankful to be part of the show. Performing and sharing my talent is a huge part of my musical journey, and the show allows me to do that. I also get to explore different genres,” she said, adding that her “AOS” family has been nothing but supportive since she joined the show.

“Kuya Rayver (Cruz) would give me a high five or a fist bump whenever we saw each other. Kuya Christian Bautista and everyone else are so kind and generous with their wisdom that can help my career… I’m starting to get to know Althea Ablan, Sofia Pablo and Shayne Sava,” she related. “I’m grateful for the moments I have spent with them.”

Since most of her performances after “Idol” were done online because of the pandemic, Zephanie admitted that going back to the live stage was quite nervewracking. “The pressure and nerves will always be there. For the past three years, I have been singing, but people could only see me on their gadgets and phones,” she said.

“Performing live is still a different experience,” she added. “But it’s good to feel the nerves because it can drive me to be at my best.”

Her next goal is to put out a new album and hold a solo concert. “Nothing is impossible. I hope I get to do a show soon, once it’s really safe to do so,” she said. “We’re also looking for songwriters who can help us put together a new album. Now that I get to explore my voice more, I hope I can show that in my next album. I think I have grown as an artist.

Asked about her personal life and if she’s allowed to entertain suitors now, Zephanie said she’s not at an age “where it wouldn’t be impossible.” “Baka ibigay ni Lord,” she quipped, laughing. “It’s good for a teenage girl who’s growing to become a young lady to have that feeling of being admired… But I have yet to have suitors.”

But of course, the top priority will always be career and her family.

“I continue to dream for the life I want my family to have. We’re getting there… a more comfortable life, but it has been challenging because of the pandemic. But it’s one of the reasons I continue to go on,” she said. “I also feel like it’s my purpose to use my talent to inspire people. That makes me happy.”