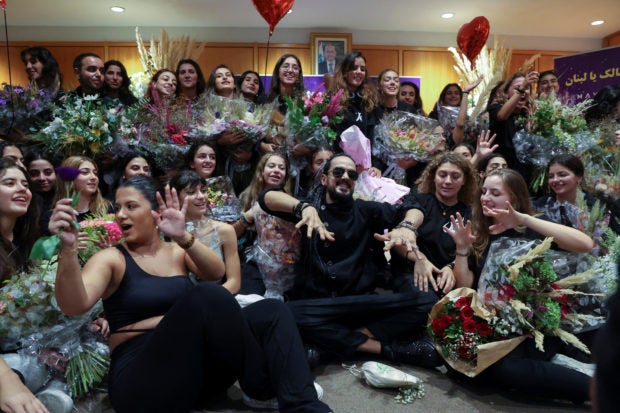 Nadim Cherfan, founder of the Lebanese dance troop Mayyas who won the America’s Got Talent competition, gestures while posing with his troop at Beirut airport, Lebanon, Sept. 16, 2022. Image: Reuters/Mohamed Azakir

BEIRUT — Lebanese celebrated at home and abroad on Thursday, despite their homeland’s crises, as they woke up to the news that local female dance troop Mayyas had won the America’s Got Talent competition on United States television, bagging a $1 million prize.

“We did it! Lebanon, this one’s for you,” the group stated on Instagram alongside a video of their winning act, an Arabesque performance embellished with feathers and glowing white orbs.

Lebanon has been hit hard by an economic meltdown since 2019 that has seen the local pound lose more than 90% of its value, and repeated power cuts and fuel shortages.

Mayyas dancers often had to practice in darkened studios that had no electricity and with members missing as they had no fuel to arrive to practice, the 36-member troupe’s director Nadim Cherfan told local media overnight.

Given Lebanon’s situation, the win was “bittersweet,” said filmmaker-turned-software engineer Zahi Farah, who moved to Paris from Lebanon earlier this year and had followed the Mayyas’s progress through the AGT season.

“It’s like a big middle finger to everything dragging you down in Lebanon,” Farah told Reuters.

Lebanon’s worsening financial crisis and rampant corruption in politics had slashed opportunities for other talented people to exceed in their fields, he said.

“It’s nice to see hard work pay off for once in a country where you don’t often get things by merit. It’s like a sweet revenge,” he added.

Messages of congratulations filled Twitter on Thursday morning as Lebanese learned of the win, which had taken place overnight as they were sleeping.

Officials also joined in, with parliament on Thursday breaking into applause in their honor and President Michel Aoun awarding them the Lebanese Gold Medal of Merit.

Many Lebanese blame officials for failing to do enough to stem the crisis, turning out in massive protests against them in 2019 and sporadic rallies since then.

“Do I think they’re trying to steal the limelight?” Farah said, following government officials’ reactions. “I think they’ve stolen much worse than that, and we haven’t held them accountable.” JB