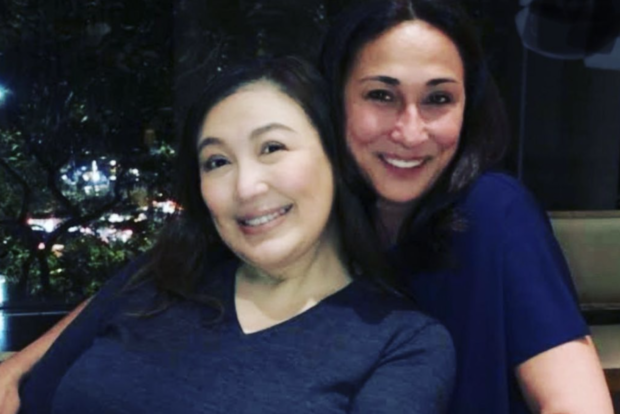 Sharon Cuneta is still in mourning as she looked back at memories with her friend Cherie Gil, and showed the last gift she had received from the veteran actress.

The Megastar showed a picture frame containing a photo of herself and Gil together, indicating that it was the last present Gil gave to her, via her Instagram page yesterday, Sept. 15. Cuneta added that the photo remains displayed in her living room since Gil gifted it to her.

“She handed it to me beautifully gift-wrapped and when I opened it, we hugged. That was Cherie,” she told fans. “As mataray (sassy) as she was in her movies, she was as sweet in real life.”

Cuneta then recalled finding out that Gil was sick when her brother, actor Michael de Mesa, told her while they were taping the now-concluded series “FPJ’s Ang Probinsyano.”

“I had had her (Gil’s) number all those months, but told Mike (De Mesa) I didn’t want to text or call her because really, what was I going to say? How was I going to tell her how I felt when I was so scared to even ask her if she was getting better?” she said.

Cuneta explained that at the time, she wanted to see Gil in person, but admitted that seeing a loved one in a “serious situation” makes her “clam up.” For her, it is a form of self-preservation and coping.

“Now all I can do is like Dorina, I put fresh strands of Sampaguita on her (our) picture everyday,” she lamented.

Dorina is Cuneta’s character in the 1980s film “Bituing Walang Ningning,” where she and Gil worked together.

Cuneta also showed an old letter that Gil had sent her, which she kept in one of her planners since 1999, as seen on her Instagram page today, Sept. 16. In the letter, Gil expressed appreciation to Cuneta for being there for her and her children.

Cuneta also recalled a happy memory she had with Gil while showing a moment from the said day on her Instagram page, also yesterday.

“On our last happy, happy evening together… I miss you so much, Cheech. I still count the days since you left,” she addressed the late actress. “… I don’t know when moving on happens anymore. I miss you and always will.”

Cuneta then thanked Gil for her genuine friendship and for being “the best” in all the movies they did together.

“You will always be my partner, no matter how brilliant my coming co-stars shall be,” she said, asking Gil to look after her.

“Yes, I am still in deep mourning. It gets harder and harder nowadays to pretend to be okay and smile and laugh only to go back to crying when I am once again alone,” she added.

Gil passed away last Aug. 5 after battling cancer, a diagnosis that she had requested be kept from the public. Despite her condition at the time, her family stated that the actress fought the disease with “grace and strength.”

Last Aug. 17, barely two weeks after Gil’s passing, Cuneta admitted that she was “still in pieces” over losing Gil. At the time, Cuneta lamented the unfortunate events happening to her friends one after the other, including the death of makeup artist Fanny Serrano, and one of her friends suffering a silent stroke.  /ra