Shatner as cranky but redeemable ‘Dad’ 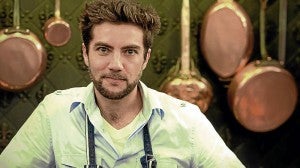 Family ties are renewed every week in the sitcom “S#*! My Dad Says” (or “Bleep My Dad Says”), starring William Shatner as the grumpy, divorced and gun-toting Ed Goodson, whose recently unemployed writer son starts living with him after running out of options.

Ed and Henry (Jonathan Sadowski) barely communicated in the years prior to the new arrangement, so each has to get used to the new housemate’s quirks. Because of Ed’s perpetually cranky disposition, Henry initially hesitated asking to stay temporarily at his dad’s place.

And while Ed’s not one to mince words, he finds it hard to express his own feelings, and be more openly welcoming of Henry. The former military doctor, however, recognizes the opportunity to be a better father to his more communicative child, a former magazine writer. Henry is given a new mattress and moves in, finally forming a closer bond with his deliberately incommunicado parent, as well as with his half-brother and neighbor Vince (Will Sasso).

Shatner’s mostly deadpan delivery of biting one-liners almost consistently charms, even when the routinely situated punch lines don’t always work. It’s not Shatner’s first time in a comedic setting; the veteran actor appeared memorably in the sci-fi sitcom “3rd Rock From the Sun” and in a number of riotous “Late Night With Conan O’Brien” sketches. But the show is something else entirely. It grows on the viewer, especially since the family-centric situations are easily relatable and the dad’s ongoing mission of “redemption” offers insights into generational differences.

Sadowski is competent and comfortable as the twenty-something son getting introduced to his doctor-gardener father’s seemingly odd customs and routines. “MADtv” alumni Sasso and Nicole Sullivan (as Henry’s sister-in-law Bonnie) are essential components to the comic equation, providing the foil to the oft-awkward father-son tandem.

Co-created by “Will and Grace” progenitors David Kohan and Max Mutchnick, among others, the show sometimes tackles gay issues. Ed becomes more sensitive to a gay waiter, Tim (Tim Bagley), whom he befriends, hires as a maid, and also treats like a son. Ed’s petulant but straightforward behavior (plus his tendency to make a fool of himself) surprisingly attracts confident women, including a popular self-help guru played by Cybill Shepherd.

WILLIAM Shatner and Jonathan Sadowski in “S#*! My Dad Says”

It’s not always laugh-out-loud funny, but the show usually succeeds in evoking hearty smiles, and even tugs at the heartstrings from time to time.

A master chef in Oriental, Mediterranean and Western cuisine, Chef Boy is joined by celebrity guests and a studio audience who get to experience his fun way of cooking and taste his featured meals.

Joining the chef in the show’s premiere are “Eat Bulaga” mainstays Paolo Ballesteros and Wally Bayola.

Larry King sits down with the cast of Harry Potter leading up to the world premiere of “Harry Potter and the Deathly Hallows – Part 2.”

Also, James and Oliver Phelps, who play the Weasley twins, take viewers on a tour of the Wizarding World of Harry Potter at the Universal Orlando Resort and interact with fans on the eve of the final Harry Potter movie.

Marcel Vigneron, season two runner-up of the reality cooking show “Top Chef,” starts a new chapter in his life by offering to whip up extravagant and out-of-the-box menus for demanding clients.

Premiering July 5 at 8 p.m. on 2nd Avenue, Marcel’s “Quantum Kitchen” follows the Molecular Gastronomy Catering Company as they cook up a fantasy of dishes.

Each episode features how unique dishes are developed for a client’s event, with Marcel supervising the whole production assisted by his team of party planners and sous chefs.

Cartoon Network offers all-new series this month, starting with the out-of-this-world adventures of aliens from “Ben 10: Alien Force” and “Ben 10: Ultimate Alien” on Saturdays, from 11 a.m. to 1 p.m.

Comedy with the hip Hollywood cat is featured weeknights in “The Garfield Show” starting tomorrow at 6:30 p.m. while the 12-year-old smart kid in “Angelo Rules” is on weekends at 9 a.m.

More adventures are in store with an easy-going Ninja Academy student in “Naruto Season 3” weekdays starting tomorrow at 9:30 a.m. The all-new series “The Smurfs” in the little mushroom village is featured Saturdays at 8 a.m.