Robin Wright to film docu on violence against women 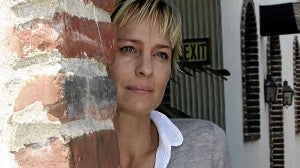 “HALF of the world is off my shoulders now,” says Robin Wright. RUBEN V. Nepales

LOS ANGELES – With both of her kids with ex-husband Sean Penn now grown up, Robin Wright has more time to devote to her causes. First stop for the actress: Congo, where she will film a documentary on sexual violence against women in the war-torn country.

“My son just graduated from high school and he’s basically gone,” Robin said of Hopper Jack Penn, who turns 18 in August, in a recent chat (Her daughter Dylan Frances Penn is 20.). “That’s it. You’re always going to be a parent. You’re always going to influence, you hope to a degree, even after they move out. The sense of release and the relief is like, oh my God, all these 18 years of trying to be the best model for your kids, trying to give them a sense of right and wrong, morality, ethics and all that.”

“Half of the world is off my shoulders now because I’ve done as much as I can. I’m going to take over ‘The Ellen DeGeneres Show,’” joked Robin, looking beautiful with short hair. She wore what she described as her “uniform… I have to wash it every couple of days.”
More time

“Now my kids are going to take what I taught them, and hopefully manifest it in the best possible way from 18 to 84,” she said with a laugh. “It’s like what I’ve done up to this point will hopefully resonate with them somehow.”

“There’s definitely more time, which is nice,” Robin admitted. “I’m going to go to the Congo and make a documentary about the violence against women that’s been going on for 10 years now. I now have the time to do it where before it was like, ‘OK, I can go from Tuesday to Thursday.’ Or ‘I’m going to be there in 48 hours only because I have to get back for my kids’ carpool.’ That was my life for so long. My kids are always going to be around. You’re always a mom. But now, I actually have two weeks to go to the Congo, which is great.”

Robin, who actively supports the Enough Project, a movement to end genocide and crimes against humanity, will shoot the documentary in Bukavu, a city in the eastern part of the Congo. “I’m going to Bukavu because that’s where the hospitals are,” she explained. News stories report that thousands of women who are victims of rape and mutilation stream annually into the medical facilities.

“It’s just too dangerous, though,” Robin disclosed. “I hope to actually go in one hospital with some NGOs and have security.” Robin has spoken at screenings of Lisa F. Jackson’s “The Greatest Silence: Rape in the Congo,” a 2007 documentary on sexual abuse survivors.

Despite her involvement in various causes, from battling AIDS to saving the environment, Robin said that she’s not as active as Sean. “I think there’s a breed that can create movement,” she remarked. “I just don’t have it in me. It’s not in my blood. I admire it greatly but it’s not in me to move in that way. I’m more behind the scenes and on helping spread awareness.”

“He’s a warrior,” Robin described her activist ex. She said that her own brand of activism has always been “present. In my case, the passion has always been there. I just never knew how to put it forward.”

“It’s a great influence to have,” she said of Sean’s political advocacy. “It inspires to help create an awareness of whatever it is that needs getting the word out there. The whole thing of using your celebrity – it works for a good cause.”

Robin is also a campaign chair for the Myasthenia Gravis Foundation of America, which raises awareness of the neuromuscular disorder and generates funds for research. “My grandmother had myasthenia gravis from ant spray. They had seasons where the ants come out. She sprayed it every day for a month in her kitchen. She got it and it really messed her up. It destroys your nervous and endocrine systems. There’s not enough money in research.”

In Robert Redford’s “The Conspirator,” Robin plays Mary Surratt, the lone female charged as a coconspirator in the assassination trial of Abraham Lincoln.

She recalled how Robert cast her: “He called and said, ‘Would you come in for five minutes? I just want to pitch you something.’ So I went. He said, ‘I’m making a picture about a motherless son and a surrogate mother in 1865, with Abe Lincoln’s assassination as the backdrop. Are you in? I was like, ‘OK, I’ll do it.’ He didn’t give me a script and yet I signed on. That’s what happened. He talked about the personal story between Frederick Aiken (James McAvoy) and Mary Surratt. There are political elements, which is pretty evident when you see the film, but he said, ‘I’m not making a political film.’”

She praised her famous director: “He’s so quietly confident without any arrogance. Everyone knew what they were doing. He was very professional. There wasn’t any tension and rage. A lot of times on movie sets you feel, see and hear the conflicts between producers or between a director and producers. In Robert’s case, it felt very professional and structured where you could be free to be the professional because you didn’t feel all that bulls–t going on, the gossip and the drama. There wasn’t drama in that way. Maybe there was drama but it was unbeknownst to us.”

She’s also in two coming films with dark themes – “The Girl with the Dragon Tattoo,” the much-awaited screen treatment of Stieg Larsson’s novel, and “Rampart,” from James Ellroy’s screenplay about the late 1990s LA police scandal.

“Ellroy – that’s dark,” she said. “That’s a lot of cigarettes and late nights on the typewriter but I do respond to that. I like Bukowski poems. Maybe because there’s more to play and we play for a living. To give more layers not only gives the audience more to feel. I think it’s equivalent to that. There’s so much left unanswered when you have a complicated character.”

Lighter fare is Bennett Miller’s “Moneyball” with Brad Pitt and Jonah Hill. “I play the ex-wife of Philip Seymour Hoffman,” she revealed. “We have a child together. I’m married to Spike Jonze. I only have two scenes in the movie but they’re hysterically funny.”