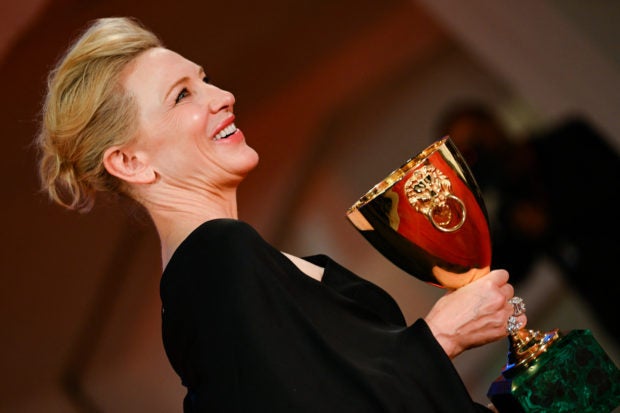 Cate Blanchett, holding the Coppa Volpi for Best Actress she received for “Tar,” poses on Sept. 10, 2022 during the Award Winners Outside Photocall following the closing ceremony of the 79th Venice International Film Festival at Lido di Venezia in Venice, Italy. Image: AFP/Andreas Solaro

Considered one of the greatest actresses of her generation, Cate Blanchett won the best actress award in Venice for a second time on Saturday.

Blanchett won in 2007 for her gender-bending performance as Bob Dylan in “I’m Not There,” and also headed the Venice Film Festival jury in 2020.

This time, the 53-year-old won for her complex and challenging role in “Tar” as a renowned classical music conductor accused of inappropriate liaisons with female colleagues.

The film tackles several hot-button issues including the MeToo movement, political correctness and women in positions of power.

But Blanchett told journalists in Venice that she wasn’t interested in “agitprop,” or political propaganda through art.

“I don’t see artistic practice as an education tool,” she said.

After a film comes out, she said, “it can be politicized, discussed, people can be disgusted with it, offended by it, inspired by it, but that’s outside our control.”

Born in Melbourne on May 14, 1969, Blanchett began her career onstage, before working her way into increasingly high-profile film roles.

She made her breakthrough performance in 1998, playing the 16th century British monarch in “Elizabeth,” which won her a slew of awards and her first Oscar nomination.

Only a year earlier, she had been on the public side of the barrier on her first trip to Cannes, having to beg for a ticket to get into one of the premieres.

By 1999, she was back in Cannes, but this time as a star, presenting “An Ideal Husband.” Since then, her star has never stopped rising.

She has been nominated seven times at the Academy Awards, winning the supporting actress statuette for a pitch-perfect impression of Katherine Hepburn in “The Aviator” in 2004.

She won the top acting prize in 2013 for her performance as the wife of a disgraced high-society mogul in Woody Allen’s “Blue Jasmine.”

Blanchett has also dabbled in blockbusters, appearing in “Indiana Jones and the Kingdom of the Crystal Skull,” “Robin Hood,” “Cinderella” and “Thor: Ragnarok,” as well as her iconic appearances in all of Peter Jackson’s “Lord of the Rings” films.

But it is parts in more indie fare that have built her reputation, from the wealthy socialite in “The Talented Mr. Ripley” to the crusading Irish journalist in “Veronica Guerin” or another heavily-accented (and pregnant) reporter in Wes Anderson’s “The Life Aquatic with Steve Zissou.”

She starred in the much-loved same-sex romance “Carol” in 2015, for which she earned her seventh Academy Award nomination.

She has repeatedly returned to the stage, to similar levels of acclaim. The New York Times described her as “one of the best and bravest actresses on the planet” after watching her in 2011’s production of “Uncle Vanya.”

Along with her writer husband Andrew Upton, Blanchett became artistic director of the Sydney Theatre Company from 2008 to 2013. AP/JB