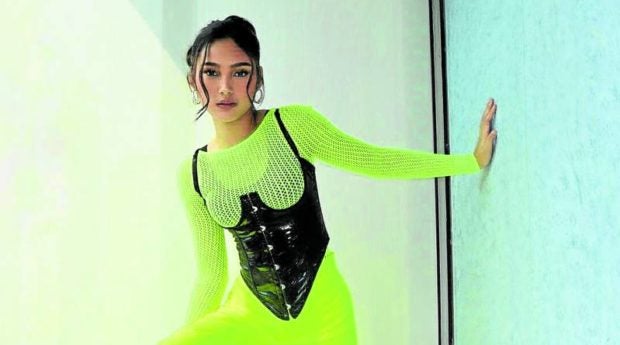 “As they say, your only limitation is your imagination,” declared actress Karina Bautista, who played the feisty Bea Sicat in the defunct series “Viral Scandal,” when asked whether she has already set a limit to what projects to take on or roles to portray on screen.

“I’m very experimental with the projects I take. My role in ‘Viral Scandal’ is very dramatic, while the one for ‘Hoy, Love You! is pa-cute. As for the episodes I’ve done for (the drama anthology) ‘Maalaala Mo Kaya,’ I was either a wife or a mom. So I’ve been trying a lot of things and discovering what I can and still can’t do,” said Karina during a virtual media gathering to promote the new season of the online talent search “Bida Star Versus,” which she will be cohosting.

“After discovering my limitations, I sort of want to push myself more. These limits are merely mental. When it comes to this industry, you have to be tough when in the face of bashers or bullies. You have to always keep calm. It’s a mental game for all of us who have to fight the urge to talk back,” the 20-year-old pointed out. “Whenever I feel down or sad, I pray. I’d say, ‘Lord, you know how terrible I’m feeling, but I will choose to say nothing. ‘Di ako papatol, Lord. I will simply cry this out.’”

Karina said that before she joined show biz, she was known in school as someone spunky, combative and outspoken. “I had to change because, as a celebrity, I know that I needed to control myself, that I have to have some sort of filter. I also realized that I can’t control everything that’s written or said about me, that everything is a mental game—whoever speaks or reacts first loses. I will always choose to take the higher ground,” she declared.

Karina’s first venture into show biz was via the reality talent search “Pinoy Big Brother” (PBB) in 2018. She emerged as a finalist of the “PBB: Otso” edition. In 2019, she signed up with ABS-CBN’s Star Magic and appeared in the teleserye “Sandugo,” alongside her onscreen partner Aljon Mendoza.

KarJon (short for Karina and Aljon) is part of the unreleased Regal Entertainment-produced film, “‘Di Tayo Bagay,” with Erich Gonzalez and Arjo Atayde as lead actors.

Karina said she is now focused on improving her craft and patiently waiting for her big break to come. “In this industry, you have to be ready all the time. When that offer comes, you can’t say, ‘Oh I’m sorry! I’m not ready for that yet,’ because opportunity only knocks once,” she declared.

“I can honestly say that I have yet to land my dream roles. I’m preparing myself mentally and emotionally in case they come. However, doing ‘Viral Scandal’ has taught me a lot and I’m super thankful for that chance. I’ve grown a lot as an actress. I, myself, saw this when I reviewed my performance–from the first scenes until the end,” she added. “I’m in no rush to play lead roles, though. I’m still enjoying this phase in my career. If it’s meant to happen, it will happen. I will just let things be for now.”

Karina will be joined by PBB housemates Benedix Ramos and Anji Salvacion in hosting the fifth season of “Bida Star” starting Sept. 5. The show will see male contestants going against their female counterparts to determine the next Ultimate Bida Star.

According to Karina, the show has leveled up and widened its reach through different digital platforms such as Kumu, Facebook, and TikTok in order to cater to more “dreamers.”

The “Bida Star” winner will receive an ABS-CBN management contract, Star Magic Workshop Scholarship, guesting in other ABS-CBN digital shows, a chance to have a project with PIE channel, and a cash prize of P50,000. Watch “Bida Star Versus” on Star Hunt’s Kumu and Facebook accounts. INQ