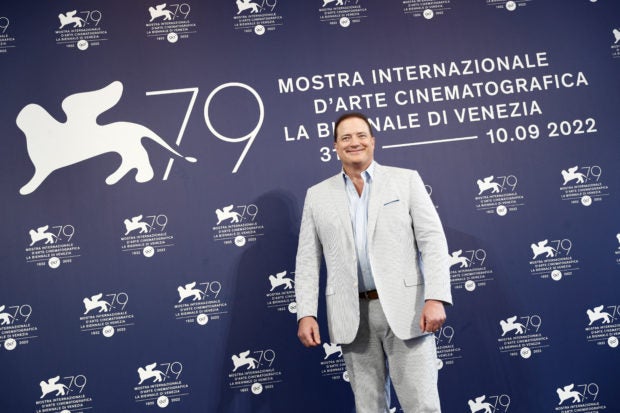 VENICE — American actor Brendan Fraser, returning to the big screen as a leading man after a nine-year absence, said on Sunday that playing the obese hero of “The Whale” was the biggest challenge of his career.

The movie, directed by Darren Aronofsky, is receiving its premiere at the Venice Film Venice, with Fraser already being touted as an Oscar contender for his portrayal of Charlie, a gay, 600-pound (270-kilogram) man, desperately trying to reconnect with his estranged daughter.

The role required Fraser to don prosthetics and makeup that could take up to six hours to apply, leaving him barely able to walk in the cramped confines of Charlie’s dilapidated home.

“I needed to learn to absolutely move in a new way. I developed muscles I did not know I had,” Fraser told reporters ahead of the red-carpet opening.

“It gave me an appreciation for those whose bodies are similar, because I learnt that you need to be an incredibly strong person physically and mentally to inhabit that physical being,” he said.

The film is an adaption of Samuel D. Hunter’s 2012 play of the same name, chronicling the rapid decline of Charlie, a gentle soul struggling to come to terms with the death of his partner and eating himself to death in his distress.

Despite the pain and anguish, Charlie’s compassionate heart, trapped beneath a wheezing mountain of skin, shines out as he looks to rekindle his relationship with his daughter, a deeply troubled teenager, played by “Stranger Things” star Sadie Sink.

“By far and away I think Charlie is the most heroic man I have ever played because his superpower is to see the good in others and bring that out,” said Fraser.

Aronofsky, whose movie “The Wrestler” won Venice’s main Golden Lion award in 2008, said one line in the script (“People are incapable of not caring”) inspired him to make the film.

“(It) is the most important message to put out in the world right now. Everyone is leaning into the cynicism and darkness and giving up hope. That is exactly what we don’t need right now,” Aronofsky said.

Fraser has suffered his share of darkness over the past decade, with his glory days starring in films such as “The Mummy” and “George of the Jungle” appearing to be well behind him.

“I looked different in those days,” he said on Sunday.

Aronofsky said he spent a decade searching for the right lead actor and cast Fraser after spotting him in a trailer for a low-budget Brazilian film. Fraser said he had put his all into the part.

“My journey to where I am now has been to explore as many characters as I can,” he said. “This (role) presented the biggest challenge to me.” JB