Sunshine Cruz to Cesar Montano's partner: 'Thank you for being a wonderful tita to my girls' | Inquirer Entertainment

Sunshine Cruz to Cesar Montano’s partner: ‘Thank you for being a wonderful tita to my girls’ 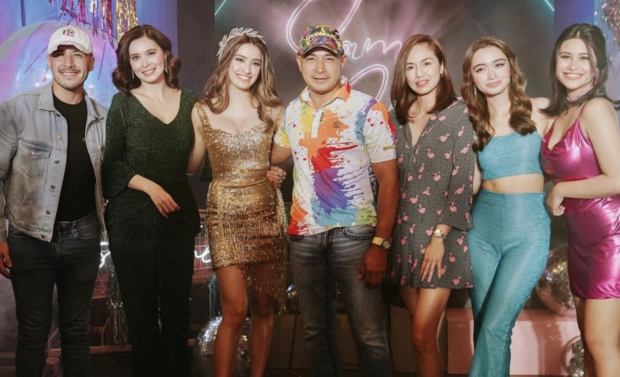 Sunshine Cruz is elated over the family reunion she and her daughters Angelina, Sam and Chesca had with actor Cesar Montano, along with the former couple’s current partners Macky Mathay and Socorro Angeles.

Sunshine showed their family photo from 2013 along with their recent snap, this time with Angeles and Mathay, from Sam’s 18th birthday party, via the actress’ Instagram page yesterday, Aug. 31.

“Who would’ve thought that after almost 10 years mabubuo ulit (we will be complete again) in one frame! In God’s perfect time talaga (really),” she said.

“Kahit ano pa ang nangyari noon, one thing na hindi mawawala ay ang pagiging magulang namin sa mga bata (Whatever happened before, one thing that will never be gone is [our responsibility] of being parents to our children),” she added. “The girls are genuinely happy to have their dad back in their lives.”

Sunshine also addressed Angeles and thanked her for her good relationship with the actress’ daughters. Sunshine expressed her gratitude to Mathay as well then concluded her post with a quote about how forgiveness “changes the future.”

“Thank you Kath (Angeles) for being a wonderful tita (aunt) to my girls, I/we appreciate you! My girls love your kids so much,” she told Angeles.

“Thank you sa lahat ng magaganda (for all the nice) and positive messages. May God bless us all,” Sunshine stated.

Sunshine and Montano separated in 2013, and their marriage was annulled in 2018. Meanwhile, Montano and Angeles share three children together, namely Sam, Liam and Kristen. JB