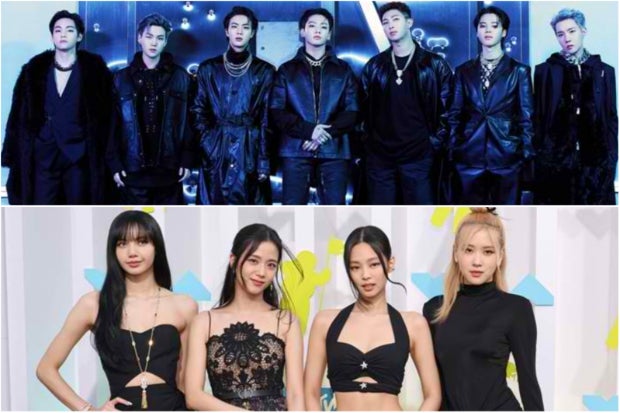 BTS, Blackpink and Seventeen took home a bag of trophies from the 2022 MTV Video Music Awards, extending a winning streak for K-pop in the global music scene.

BTS, the most-nominated group of this year’s awards ceremony, won for group of the year for the fourth consecutive year. The MTV VMAs are one of the four major annual United States music shows, along with the Billboard Music Awards, Grammy Awards and American Music Awards.

The K-pop phenomenon’s win was announced at the award ceremony held at the Prudential Center in Newark, New Jersey, on Sunday, but the bandmates did not make the trip to the show this time as they are currently focusing on solo projects here in South Korea.

The septet picked up its first awards at the VMAs in 2019 by winning for best group and best K-pop. It collected another four trophies in 2020 and three more at last year’s VMAs. Alongside BTS, other K-pop artists snagged nominations at this year’s VMAs and took home prizes as well.

Blackpink was also nominated in group of the year and best metaverse performance. The last time the act won at the U.S. music show was in 2020, when it became the first K-pop girl group to nab a trophy for song of the summer with the 2020 hit, “How You Like That.”

Blackpink also became the first female K-pop act to perform at the MTV VMAs and the fourth among all girl groups on the stage, following TLC, the Spice Girls and Fifth Harmony. The act graced the annual event with a performance of its latest single, “Pink Venom.”

Boy band Seventeen was announced as the winner of “Push” performance of the year, after the group was named as the first-ever K-pop artist to be part of the global “MTV Push” program. With this win, the group has become the first K-pop act to take home the award. JB

Taylor Swift wins video of the year at the MTV VMAs