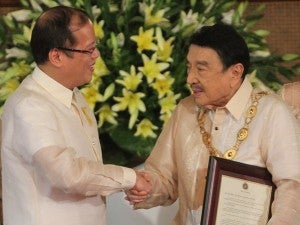 President Benigno Aquino on Thursday cited Dolphy’s “immense” contribution to the entertainment industry, but said it was leaving it to cultural authorities to nominate the gravely  ill comedian for the national artist award as the process “should be free from politics.”

Honasan on Thursday said  that he would introduce two resolutions recognizing Dolphy’s contribution to the development and international recognition of the Philippine movie and television industries and reiterating the call to declare him national artist.

Malacañang called on Filipinos to pray for the health of the “revered icon of the entertainment industry.”

Presidential spokesperson Edwin Lacierda said the President had told him he thought Dolphy had “contributed immensely to the arts.”

“In his (Mr. Aquino’s) own words, Dolphy has contributed tremendously to what we call ‘art for man’s sake,”’ Lacierda told reporters.  The President’s “thoughts are with Dolphy and his loved ones in these trying times.”

Urging the people to pray for Dolphy’s health, Lacierda said: “We are united in our intentions for our revered icon of the Philippine entertainment industry.”

On the clamor for Dolphy to be named national artist, Lacierda said the President “recognizes there is a process in nominating and selecting a national artist.”

“There is a process that we would like to respect and it is a very tedious, stringent process, one that is free from, should be free from, politics,” he said.

Lacierda said the Palace was not part of the process of determining who  should be conferred the Order of the National Artist.

He dismissed speculations that the Aquino administration had not named Dolphy a national artist because the comedian supported the presidential bid of Senator Manuel Villar  in the 2010  national elections, pointing out that the Palace conferred on Dolphy in November 2010 the Grand Collar of the Order of the Golden Heart.

Explaining the three-tiered process of selecting a national artist, Lacierda said the National Commission for Culture and the Arts (NCCA) accepts nominations for national artist from the Cultural Center of the Philippines (CCP).

From the list of nominees, a research body will look into the body of work of the nominee, according to Lacierda.

Thereafter, the joint boards of the CCP and the NCCA will select from the list of nominees who are qualified to be national artists and make a recommendation to the President, Lacierda said.

Lacierda said Dolphy had been nominated for national artist, as shown by several letters received by the NCCA and the CCP.

“What we believe is that once he is nominated, it’s time for the NCCA and the CCP to consider Dolphy as a nominee for national artist,” he said.

But Lacierda said there was a temporary restraining order (TRO) on the conferment of national artist titles that the Supreme Court issued in 2009, involving filmmaker Carlo Caparas, among other controversial nominees. He said he did not know how the NCCA and the CCP would act on the nominations for Dolphy considering the TRO.

Asked whether Malacañang should make representations with the Supreme Court considering Dolphy’s present condition, Lacierda said the Palace did not want to be accused of encroaching on the powers of the judiciary.

“I’m certain that the Supreme Court is fully aware of what’s going on,” he said. “We do not need to remind them. It’s up to them.”

But even without the national artist award for Dolphy, Lacierda said the Filipinos are aware of the comedian’s great contribution to the Philippine entertainment industry.

“While an award is certainly welcome for Dolphy, I think the Filipino people know and value the contribution he has done for Philippine society,” Lacierda said.

Senator Villar said he wrote CCP Chairperson Emily Abrera about the award to Dolphy way back in 2007. With Dolphy in critical condition in the hospital, Villar pressed his request that the comedian be recognized as national artist.

“Dolphy is one of the few gems of the entertainment industry,” Villar said. “His [success] as a comedian will be very hard to replicate.”

Dolphy is ailing from chronic obstructive pulmonary disease. His condition improved Thursday afternoon after he underwent  a dialysis.

His son Eric Quizon said, however, that he remained in a critical state and needed a blood transfusion.

“One good thing that happened was that he opened his eyes for a few seconds and looked around,” Eric Quizon told reporters at the hospital. “This gave my siblings a glimmer of hope. We know now that he’s able to hear us, that somehow he’s trying to communicate.”

On Thursday morning, Dolphy’s other son, former actor Rolly Quizon, said doctors had given his father only 24 hours to 48 hours to live.

But Dolphy’s marked improvement in the afternoon proved them wrong. “He seems to be winning over this,” he said. “He has always been a fighter.” With reports from Cathy C. Yamsuan and Marinel R. Cruz