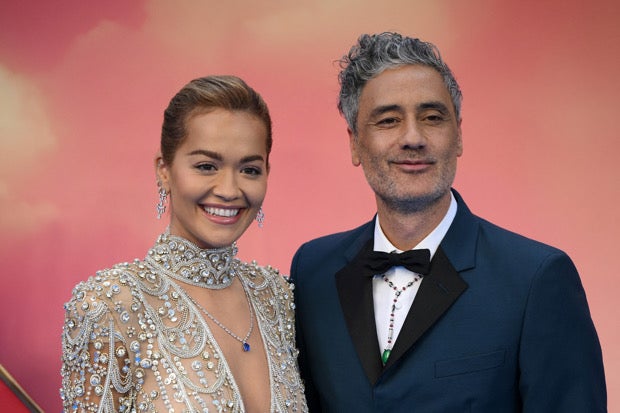 British actress-singer Rita Ora and New Zealand filmmaker Taika Waititi pose on the red carpet on arrival to attend the UK Gala Screening of the film “Thor: Love and Thunder,” at the Odeon Luxe in London on July 5, 2022. Image: AFP/Daniel Leal

Rita Ora and Taika Waititi reportedly tied the knot in an intimate ceremony attended by their “nearest and dearest” in London.

The couple, who first sparked dating rumors in April last year, apparently got engaged two months before their wedding, as disclosed by an unidentified source to British tabloid newspaper The Sun on Monday, Aug. 8.

“It (the wedding) was a really intimate ceremony and super special for everyone there. Their nearest and dearest can see how madly in love they are,” the source was quoted as saying.

“Despite living in the spotlight, Rita is determined to keep the relationship as private as possible and didn’t want to make a big song and dance about the wedding,” the source added.

The British actress-singer has reportedly changed her name to Rita Waititi-Ora, and is set to have a “showbiz-style bash” to celebrate her marriage with the New Zealand actor-filmmaker.

Ora is known for her songs “For You,” “Let You Love Me” and “I Will Never Let You Down,” among others. She was also part of the 2015 film “Fifty Shades of Grey” as the sister of Jamie Dornan’s character.

Meanwhile, Waititi helmed the recently released Marvel film “Thor: Love and Thunder,” where he played the role of Korg. He also wrote and directed the 2019 film “Jojo Rabbit,” for which he won an Oscars for Best Adapted Screenplay in 2020.  /ra