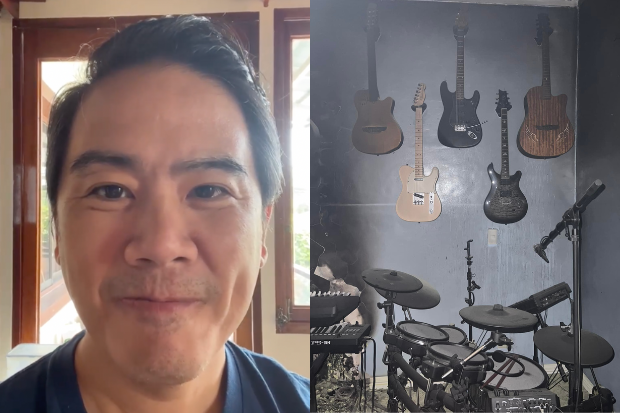 Jimmy Bondoc is saddened after his own studio was engulfed in fire that burned down about P1 million worth of the instruments and equipment he uses as a musician.

The singer gave the public a glimpse of the damage in his studio, as seen on his Facebook page yesterday, Aug. 2. Among the equipment he showed were musical keyboards with melted keys, several broken guitars and a drum set.

“Just had a fire in my studio. We are safe. But lost so much of the equipment I have worked so hard for over the years!” he said. “The Lord giveth, the Lord taketh away. I am blessed to be alive. Asking for your prayers.”

Just had a fire in my studio. We are safe. But lost so much of the equipment I have worked so hard for over the years!…

Bondoc also did further damage assessment and showed the electrical outlet where the fire first started, via Facebook live video yesterday. He said that a computer for editing music and a camera used for shows were included in the fire, though he is yet to check if the items are still working.

We are alive. That is all.

Despite having lost his music equipment, Bondoc told the public not to give him money, as per his Facebook post, also yesterday.

(I lost around a million pesos worth of equipment, so many people want to help me. I hope you do not think I am trying to be “holy,” but I will just work to get the things I lost.)

Bondoc urged fans to donate to his friends Atty. Bruce Rivera and Jemelee Tanedo instead. Rivera is in a coma and has medical debt amounting to P1 million, while Tanedo is a cancer patient who is undergoing medical treatment.

Bondoc is known for his songs “Let Me Be the One” and “Hanggang Dito na Lang,” among others.

Back in September 2021, he took oath as a board member of the Philippine Amusement and Gaming Corp. (Pagcor), after previously serving as the agency’s vice president for corporate social responsibility.  /ra

K Brosas sustains minor injuries from car accident in US