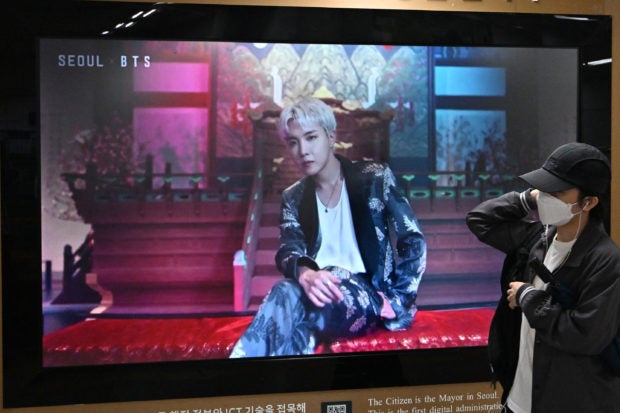 A man walks past an advertisement screen showing J-Hope, a member of K-pop group BTS, at a subway station in Seoul on June 15, 2022. Image: AFP/Jung Yeon-je

The star appeared to dramatically pop out of a box as he took the stage in Chicago’s Grant Park, and was greeted by a sea of screaming fans.

The crowd rapped and sang along to songs from J-Hope’s new solo album and to BTS classics such as “Dynamite.”

“Do you want some more?” he asked the mass of people, offering a special shout-out to the “BTS Army,” as the group’s super-fans are known.

J-Hope, who also presented a special message to viewers in Korean, was joined at the end of his set by singer Becky G for a rendition of their collaboration “Chicken Noodle Soup.”

This year’s edition of Lollapalooza, which was streamed live on the Hulu platform, also featured the U.S. festival debut of Tomorrow X Together, another South Korean boy band that is under the same label as BTS.

“These artists have been given great gifts in communication. Their global audience speak different languages but possess an intense passion for their music,” said Lollapalooza founder Perry Farrell in June. “Lolla is the place where all music genres live in harmony.”

J-Hope’s main-stage performance comes more than a month after the seven members of BTS, one of the world’s most popular acts, said they were taking a break from the group to focus on solo pursuits.

In an emotional video clip posted to the septet’s official YouTube channel, they told fans they were “exhausted” and needed time apart.

At the time, J-Hope said the move could help BTS “become a stronger group.” The 28-year-old performer’s debut solo mixtape “Hope World” peaked at number 38 on the Billboard top albums chart in 2018.

BTS is the first all-South Korean act to reign over Billboard’s U.S. top singles chart, a milestone they achieved with “Dynamite,” the group’s first smash hit sung completely in English.

They are also one of few acts since The Beatles to release four albums that hit number one in the U.S. in less than two years.

The group has twice been nominated for a Grammy but has yet to win. BTS made headlines anew earlier this year for visiting the White House to deliver a message on the fight against anti-Asian racism to President Joe Biden. AP/JB

BTS’ V, Jennie and Lisa of BLACKPINK among top Instagram influencers in US