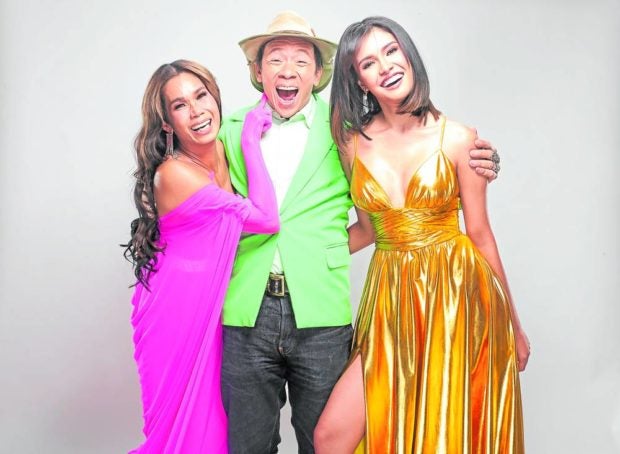 When “Kuya Kim” Atienza learned that he would be part of the program that would replace the long-running talk show “Mars Pa More,” he made sure to personally break the news to his former cohosts, Camille Prats and Iya Villania.

“In show biz, so many things happen all at once. And sometimes, you’re the last one to know about news that concerns you. And so, I told myself that it was my duty and responsibility to tell Camille and Iya first and foremost, before they hear it from someone else. It had to come from me,” he said in a virtual conference for the new game show “TiktoClock.”

At first, Kuya Kim, Camille and Iya were hoping that “Mars Pa More”—which then had been running for 10 years—would get extended. In fact, Kuya Kim related, the show was pitched for the 11:15 a.m. weekday timeslot. However, management eventually decided to put out a new show.

“Two months before ‘Mars’ ended, management told us that the show would end. I also thought that I would be gone, too. But soon, I was told that I would be included in the new show. I was surprised. But the dilemma back then was how to tell Camille and Iya,” he related.

“So after I got the news, I asked permission from the management if I could tell Camille and Iya about this, because I didn’t want them to know elsewhere. Minsan, alam na ng buong network, pero hindi mo pa alam,” he said. “I called them right away.”

Luckily, everything turned out well. Well wishes were exchanged and there were no hard feelings. “Camille and Iya are very kind people. They said they hoped for the show’s success and promised that they would pray for me,” Kuya Kim said.

After spending 10 months with Camille and Iya, Kuya Kim now considers them as his “sisters.” “We were sad that ‘Mars Pa More’ was no more. But they were sincere and genuine … totoong tao,” he said.

“TiktoClock,” a game show featuring timed challenges, performances and interactive segments, reunites Kuya Kim with comedienne Pokwang, whom he got to work with in the noontime variety show “Wowowee” 12 years ago.

“I was a guest cohost then, and we hit it off so well. It made me wish for a game show with her,” he related. “And after 12 years, the dream and opportunity came true … in God’s time,” said Kuya Kim, who admires Pokwang’s quick-quittedness and off-the-wall humor.

“Tawang-tawa ako sa kanya. I know her humor well and I have been a fan for a long time. But now, I got to know her as a friend. I see her more caring side. She is motherly and caring. She makes sure that everyone on the set is well-fed. What she has she wants you to have, too,” he said.

“TiktoClock” also features Miss Universe Philippines 2020 Rabiya Mateo, whom Kuya Kim described as a “surprise.” “I assumed that beauty queens would be conscious of their angles. But she’s not. Her real personality came out. I thought she would be reserved, calculated in her responses. As it turned out, she could break out of her poised self. Koboy din,” Kuya Kim said.

The show’s main segment is called “Oras Mo Na,” which will have two contestants trying to outsing each other and impress the judges with only 60 seconds on the clock. There’s also “Hale Hale Hoy,” which will have studio viewers teaming up with Kapuso stars to vie for prizes. Another segment is “Dance Raffle,” where hopefuls try to learn trending dance crazes.

Kuya Kim admitted that they’re an unlikely trio. But this is the very reason, he said, that makes the onscreen chemistry special.

“We’re an unlikely group of people—a comedian, a news personality and a beauty queen. They could have easily just gotten three entertainers to do the job. But the chemistry is also out of the box, which I believe the audience will enjoy,” he said, adding that all of them are all determined to keep honing their craft.

“We’re willing to learn. We know that the show isn’t about us, but the audience. It’s a privilege to be given this show. And so, we all agreed that we have to do our best and give all we can give,” Kuya Kim said. INQ