Angeline Quinto should make it on her own, not as Sarah Geronimo’s clone 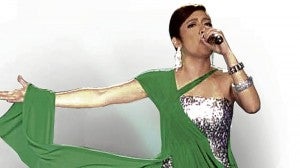 As promised after our review of the film “Born to Love U,” here’s a closer look at Angeline Quinto’s first lead portrayal in Jerome Pobocan’s film:

All told, despite Angeline’s best and most earnest efforts, her performance and characterization fell short of the standards for a promising and effective portrayal by a new screen thespian.

To begin with, while her eyes are expressive enough, they have a characteristically and constantly sad and worried look to them that limits her effectivity in less kawawa scenes.

Her beauty also isn’t what you’d call exceptional, so you wonder why such a to-do is being made over her as a big-screen performer.

Then, as her lead performance gathers steam, you realize more clearly what’s going on. Angeline is being molded pretty much along the lines of the way that another singer-actor, Sarah Geronimo, and her own acting career, has successfully been charted—as a comedy-dramatic-musical performer, with a heavy emphasis on the “kooky comedy” part of the equation, to endear her to the giggly peanut gallery.

For that reason, Angeline’s character here, like Sarah’s in many of her hit starrers, is palaban, wacky and a veritable dervish of knee-jerk delights.

Trouble is, Sarah is better-looking than Angeline, so the new talent is pushed extra-hard to compensate for that, and the eager-beaver stress and strain show.

To be sure, being a new talent, Angeline has fewer bad habits to contend with, but that innate advantage is eroded away by the director’s use of cliché “entertaining” devices to raise the movie’s kilig value, and Angeline’s performance is further weighed down and rendered predictable by this.

The movie’s central problem for Angeline is the fact that she’s made to come up with a full lead portrayal before she’s become aware of the rigorous demands, expectations and necessary context for stellar performances.

Being relatively raw, she does as she’s told, but her portrayal lacks enough of her emotional and artistic inputs for her to make it her own.

It’s fine to be an obedient actor, but the biz needs much more than that.

It really is quite unfair to Angeline to force her to succeed as a screen performer by making her come off as a younger and fresher Sarah. Even the more established star has been trying hard of late to wean herself away from her restricting, cliché screen persona, so why should Angeline now be trapped in it?

If her launching movie turns out to be popular and leads to a follow-up project, Angeline should resolutely counter her handlers’ “safe” career plans for her, and insist on making it as her own person—and screen persona—not as Sarah’s clone.

It also makes sense that her follow-up movie should take fuller advantage of her musical ability, to beef her stellar cachet and “K.”

Movie musicals are making a good comeback, with the success of “Mamma Mia” and the more recent “Rock of Ages,” so a local film musical would be a smart move for Angeline and her handlers.

Of course, her leading man should also be a standout singer, so one-note tragedians needn’t apply. Perhaps a search for a fresh-faced male singing-acting-dancing find could be undertaken?