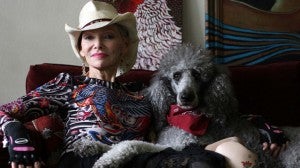 Name: 9771906_075e8.jpg Caption: In this May 13, 2010 photo, actress Susan Tyrrell, poses for a photograph with her dog Zuzu in Austin, Texas. Tyrrell, the Oscar-nominated actress known for roles in offbeat films including John Waters' "Cry-Baby," has died. She was 67. AP FILE PHOTO

DALLAS – Oscar-nominated actress Susan Tyrrell, known for roles in offbeat films including John Waters’ “Cry-Baby,” has died. She was 67.

Tyrrell died Saturday in her sleep at home in Austin, her niece told The Associated Press on Tuesday. Tyrrell, who received a best supporting actress Oscar nomination for her role as barfly Oma in John Huston’s 1972 boxing movie “Fat City,” appeared in more than 75 movies and television shows.

“She had a larger than life personality,” said David Zellner, who directed Tyrell in the movie “Kid-Thing,” which is currently making the rounds at film festivals. “She had more adventures and experiences in her life than most anyone I know.”

The movie is about a 10-year-old delinquent girl who lives in the Texas countryside and happens across a mysterious woman, played by Tyrrell, in a well, said Zellner.

Her niece, Amy Sweet, said her aunt moved to Austin to live near her. She said Tyrrell’s legs were amputated below the knee 12 years ago as a result of complications from a blood clotting disorder.

Sweet said her aunt’s passions ranged from rap music to animals, and that she even had a bug collection.

“On the night she died, she’d found a dragonfly she was excited about. Everything was a huge deal,” Sweet said.

A Travis County Medical Examiner’s Office official said a cause of death was pending.

Tyrrell was born Susan Creamer on March 18, 1945, in San Francisco, though she eventually changed her last name to Tyrrell, her mother’s maiden name, Sweet said. Tyrrell grew up in Connecticut and then got her start in acting on the stages of New York City before moving to Los Angeles, Sweet said.

Sweet said she plans to celebrate her aunt’s life with a showing of “Fat City” next week at an Austin movie theater, followed by a gathering there to recognize her aunt’s “unbridled irreverence and love for life.” The movie showing and memorial will be open to the public, with a cost of $5 for those who aren’t friends or family.

“She loved to party,” Sweet said. She said her aunt would often write in a journal, and an entry from January featured the line: “I demand my death be joyful and I never return again.”

Read Next
YouTube piano sensation makes London debut
EDITORS' PICK
1,797 more Covid-19 infections raise PH active cases to 33,603
New Year, New Rediscoveries
Acer Philippines welcomes you to its first flagship store
UP president challenges AFP claim on Reds’ campus infiltration
WHO says fabric facemasks still work against virus variants
Is your company a growth champion? Stand up and be recognized!
MOST READ
Wife stabs husband after seeing her younger self in old photos, thought he was cheating
NBI files raps vs top execs of 2 tech firms
Ate Vi’s message to those against ABS-CBN’s franchise renewal
Cop, 12 others killed in Maguindanao shootout
Don't miss out on the latest news and information.