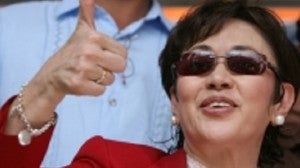 MANILA, Philippines—Consider this a legitimate way to amass campaign funds.

Senator Ralph Recto has urged reporters covering the Senate beat to watch his wife Batangas Governor Vilma Santos’ latest movie, a suspense thriller directed by Chito Rono, and to bring friends who will pay to watch it.

Recto said Santos needs to gather funds for when she seeks a third term as governor of Batangas.

“You watch the movie para may panggastos si Vi (Santos’ nickname) sa election,” the senator said. “I’ll give all of you tickets, ha? Basta, our agreement is that you will watch the movie for free but be sure to bring five friends each who’ll pay for their entrance.”

Recto had a quick huddle with reporters Tuesday during which he was questioned mostly about pending Senate bills and the series of oil price reductions.

However, the senator also used the impromptu news conference to promote Santos’ movie.

“While you’re here, let me mention that Vilma’s new movie would be coming out in July,” Recto  announced.

He added that while the Senate took 44 days to convict then Chief Justice Renato Corona, “it only took them 35 days to shoot” the movie that Rono directed.

Recto noted that the movie contained gory  scenes that might push the Movie and Television Review Classification Board to give it an R-18 rating.

“The audience might be limited to those 18 years old and above.  So I’m giving you all tickets and be sure to bring your paying friends,” he stressed.

In 1986, Santos starred in another suspense thriller, “Tagos Ng Dugo,” a career-defining movie about a female serial killer who murdered men whenever she had her period.

Recto said he would rather that Santos retire from politics after her second term as governor ends next year.

“But sometimes public service is like school. Your first term is grade school; the second, high school and the last, college.  Kailangang tapusin mo,” he said, pensively. “But if I had my way, I would prefer that she just finish the present term.  Nakakapagod na rin, pagod na rin siya.”

One thing sure, however, was that even if Santos seeks and wins a third term ending in 2016, they would not run against each other in the Senate that summer.