Buckle up for climactic finale, says creator of manga 'One Piece’ | Inquirer Entertainment

Buckle up for climactic finale, says creator of manga ‘One Piece’ 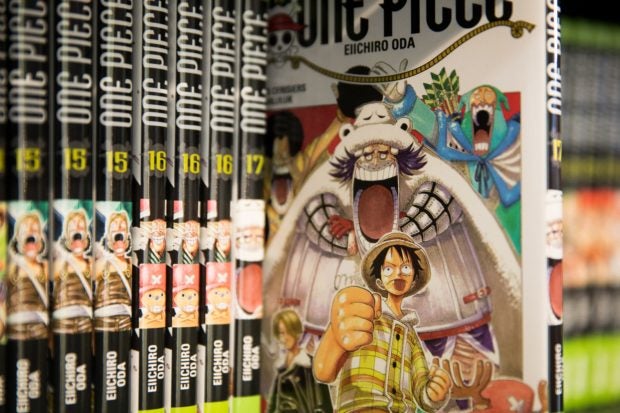 “One piece” comic books are displayed at the Paris Book Fair 2019 (salon du livre) at the Parc des Expositions in Paris on March 18, 2019, in Paris. Image: AFP/Joel Saget

Secrets will be revealed as the mega-hit Japanese manga series “One Piece” enters its final chapter, its creator said on Monday, telling fans to get ready for a wild ride.

He also assured those who hadn’t been following along for the better part of three decades that they could jump in at the final chapter and still keep up.

The manga, which follows the adventures of the swashbuckling pirate Monkey D. Luffy, has captivated millions of fans worldwide as its characters hunt for One Piece, the treasure coveted by all pirates.

“I will start presenting all the secrets of this world that I have kept hidden,” Oda said in a handwritten message posted to Twitter.

“It will be fun. Please fasten your seat belt.”

“One Piece” first appeared in manga form in Japan in 1997, with an animated TV series following two years later.

Since then, the franchise has become a global cultural phenomenon, and Oda holds the Guinness World Record for “most copies published for the same comic book series by a single author.”

Last year, the 1,000th episode of the TV series was released, with special screenings in the United States and France—the world’s biggest manga and anime market after Japan.

A live-action adaptation by Netflix is also in the works, with fans speculating it could catapult the franchise to global household name status, on par with “Star Wars” or “Harry Potter.”

In the online message, Oda said he was getting ready to resume the weekly publication of his work after taking a month-long break to prepare for the final chapter.

“Well, I am coming close to ending my prep work… It has taken me 25 years,” he wrote. “But it’s OK to start reading from here. Because… ONE PIECE starts from here ([Laughing out loud]!).” AP