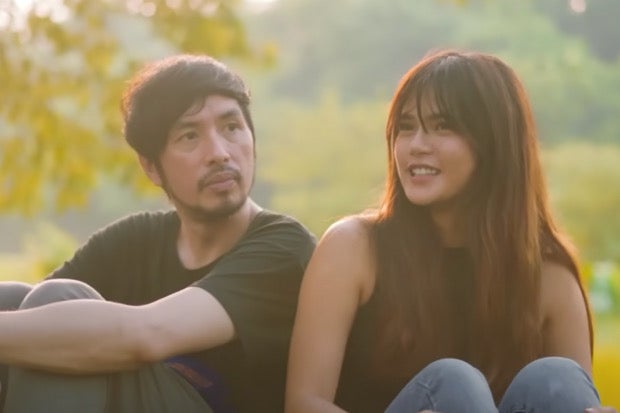 Maris Racal had a hard time going out on her first date with boyfriend, fellow singer Rico Blanco, admitting that she was afraid being seen in public with him.

The couple went on a casual date and strolled around the University of the Philippines Diliman campus where they talked about their first activities together, as seen in a vlog on Racal’s YouTube channel yesterday, June 21. During the said date, they recounted their first actual date which took place in Las Vegas.

(When we got together, we had a hard time going out on a date because we did not want to be seen in public—because we were afraid they might not understand us.)

“Bakit ‘tayo’? More ikaw. Hindi ako takot,” Blanco refuted what Racal said, to which Racal agreed. (Why [are you saying] “we”? It was just you. I was not afraid.)

Moving on from the topic, the couple discussed the songs they wrote for each other, with Racal disclosing that her song “‘Di Papakawalan” was dedicated to the former Rivermaya frontman.

(I described in the lyrics how we met [and] how I felt on our first meeting. I remember telling you that and you teared up when I said, “This is our story.”)

Blanco, who initially had no idea the song was about him, recalled how the two of them had their first misunderstanding after he tried to help Racal by suggesting verses for the said song. According to them, it was their most serious argument so far.

Racal and Blanco also recalled their first meeting which was when they collaborated for a song. A month after the said song was released, Blanco reached out to the actress and asked her to watch a movie with him, which supposedly started their constant communication with each other.

Racal confirmed her relationship with Blanco in May 2021. The two have collaborated on several songs together including “Not for Me” in 2021 and “Abot Langit” in 2019.  /ra

Maris Racal on her age gap with Rico Blanco: ‘May positive impact’