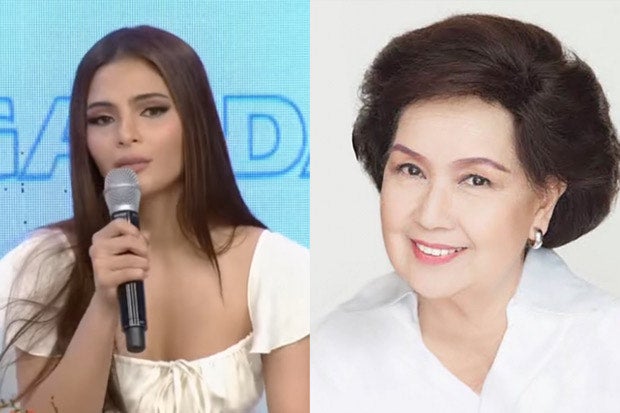 Lovi Poe paid tribute to the “Queen of Philippine Movies” Susan Roces, stating she was glad to have shared moments with the veteran actress.

Lovi recalled how she was able to visit and say goodbye to Roces before she passed away, during an episode of the morning talk show “Magandang Buhay,” as seen on ABS-CBN Entertainment’s YouTube channel yesterday, June 21.

Lovi, daughter of the late Fernando Poe Jr. with former actress Rowena Moran, talked about the late veteran actress after show host Judy Ann Santos asked Lovi how she she was after Roces’ passing.

“I think it was a very sad time but I got to see my ate (older sister) Grace and the whole family. It seems like they are very positive in a such a way that they know someone’s guiding them from above,” Lovi said, referring to Roces’ daughter with Fernando Poe Jr., Sen. Grace Poe. “It’s nice to look at it that way.”

Lovi then honored the veteran actress and the contribution she made to the film industry, describing her as someone who is “queen-like.”

“We did lose a gem sa industriyang ito (in the film industry) and she’s our queen—the queen of Philippine movies. We just have to be grateful that we were given the chance to witness her movies and the kind of person that she is,” she said.

“I’m very glad na nabigyan ako ng (that I was given the) opportunity to spend some time with her because she’s an amazing woman, queen-like,” Lovi added.

Roces passed away last May 20 due to cardiopulmonary arrest. She was laid to rest at the Manila North Cemetery beside Fernando Poe Jr.’s tomb.

Meanwhile, Lovi stars in the local adaptation of the Korean suspense-drama series “Flower of Evil,” alongside Piolo Pascual and JC de Vera, among others. The series will premiere on June 25 on Kapamilya Channel.  /ra

Susan Roces refused family’s wish to see doctor before passing: ‘This time, I’ll think of me’