‘Spiderhead’: Chris Hemsworth and Miles Teller talk about the nature of guilt, free will

Would you be willing to manipulate a person’s free will to get him to toe the line? In the wildly provocative science-fiction film “Spiderhead,” helmed by “Top Gun: Maverick’s” Joseph Kosinski, guilt-stricken inmates in a state-of-the-art correctional facility are seen volunteering as subjects for emotion-altering, mind-steering drug tests in exchange for a reduced sentence.

But the stakes get higher for Jeff when he develops feelings for new recruit Lizzy (Jurnee Smollett of “Lovecraft Country”). When it becomes clear that the potentially harmful experimental drug called Darkenfloxx—which causes extreme mental and physical pain—could soon be injected to Lizzy, Jeff begins to question if the drugs are really being produced to benefit the greater good.

Early last year, we were invited to attend a virtual set visit and take part in a long-lead interview with the lead stars of “Spiderhead,” who were then taking a break from filming on a “locked-in” set in the Gold Coast of Australia.

“‘Spiderhead’ is a sci-fi dystopian love story rolled into this thought-provoking look into the nature of free will,” Jurnee said when asked to describe the film. “It’s hard to describe the movie without saying too many spoilers about it.

“It’s a mishmash of different genres, but it’s genre-bending in a way, because just when you think you know what the story is going to be, it’ll soon take you to so many different places. Essentially, it’s about Spiderhead, the center of a prison set in the not-so-distant future. Miles and I portray inmates at this facility run by Abnesti, played by Chris, who experiments on us using emotion-altering drugs. And that’s when the action begins.”

Chiming in, Chris added, “Yeah, it’s a psychological thriller with all these genres fused together. Most of us responded the same way after reading the script—which was an absolute page-turner! I read it in one sitting, and I was immediately immersed in the questions it posed for viewers.

“You know, we all want to make the world a better place. But how do we execute these good intentions to come up with an ‘idealized’ version of the world? My character is sort of this mad scientist who runs the facility. At first glance, it seems to have this wonderful environment for its enlisted prisoners.

“But the deeper you get into this story, you realize how the behavioral drugs take a toll on them. The facility becomes incredibly manipulative … and nothing is quite as it seems. It was pretty exciting to be a part of—and it was a hell of a ride!”

Asked to talk more about his character, Chris said, “How Abnesti sees himself is not necessarily how other people see him. He believes he’s doing this wonderful thing that could change the world—and I do think his intentions are in the right place.

“But then, it becomes a moral discussion about what one person’s life is worth. At what cost are we allowed to change the world for the better? Because surely, to be able to achieve that, there will of course be some bumps in the road ahead. But if his experiment succeeds, it will eventually lead us to this perfect situation, where we can all live in harmony [if the drugs work]. 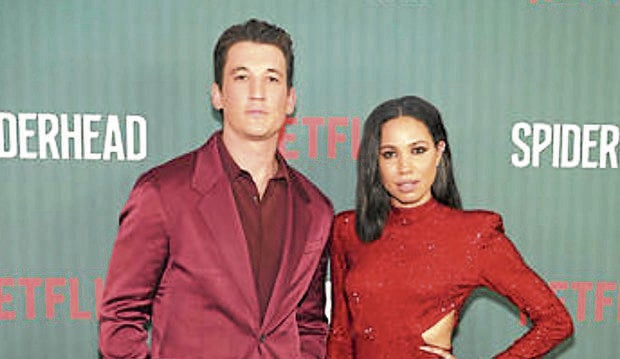 Teller (left) and Smollett at a screening in New York.

“Abnesti is a complicated individual. He’s highly intelligent, but he’s also somewhat ‘on the spectrum’ … there’s a lack of empathy. He may have that deepest understanding of people on an emotional level, but it’s anchored on a scientific point of view. Also, there’s a kind of ruthlessness in his endeavor as far as what he thinks he’s going to achieve. He believes that it is for the greater good.”

“Jeff has been in this facility for some time now,” noted Miles. “If he’s not Patient Zero, he’s probably Patient 1, 2 or 3, so he’s been in the program for a very long time. Because of that, he’s developed a closer relationship with Abnesti more than the other inmates.

“But Jeff, as well as the other inmates, are there for a reason. What’s wonderful about this story—and all the great sci-fi stories out there—is that, as Jurnee mentioned, it could already happen in the not-so-distant future.

“It gives a relevant commentary on prison reform … on what we can do to our inmates and how they’re treated. Do we treat them like dogs or animals just to keep them off the streets? Or are we actually trying to make them think about what they did and, hopefully, incorporate them back into the world as better people?

“I think Jeff is absolutely on that course, so he’s pretty diligent about the tests. He really believes in the stuff that Abnesti is preaching. But while he’s in there, he meets this wonderful woman who, because of a unique set of circumstances, soon develops a special relationship with him. But that bond is then put under a lot of pressure. It’s a wonderful script based on a fascinating story.”

In Jurnee’s case, she thinks her character finds the “reform” Spiderhead wants to see a bit “eccentric.”

“Lizzie is newer to the facility. She’s a bit of an outsider, and has a different perspective coming into it than someone like the OG Jeff. She feels it’s an eccentric way of approaching reform. But she also has a mysterious past—one that she’d rather forget.

“It wasn’t just the role that I found appealing, however. Oh man, I love this genre because it enables you to use the metaphor to talk about important themes, right? And I really loved how our writers utilized this beautiful tale in a very unconventional setting.

“Spiderhead is unlike anything we’ve ever seen in a narrative. And yet, at its heart is a story about relationships and people and shame and free will. It questions whether the end justifies the means—these are themes that I, as an artist, relate to. I want to be part of a team that explores those.

“This rarely happens to me, but when I read the script, I cried at the end, for real—it really moved me. So, when something like that happens to you, you fight, kick and scream to be a part of it!”

How does Chris think audiences are going to react to the film’s exploration of love, hate and emotion?

“I think people will come away from the story discussing what Abnesti’s real intentions are,” the actor said. “It may have been orchestrated the wrong way or too aggressively. But you could also see the benefit that he’s aiming at.

“After all, how many of us are dying at the hands of one another throughout the world and all through history? If you get a chance to all of a sudden change that and allow everyone to connect in a deeper way, how can you argue that that’s negative?”

Asked what he wants viewers to take away from the film, Miles said, “It wasn’t that long ago when doctors were prescribing MDMA to soldiers to remedy PTSD (posttraumatic stress disorder), or psilocybin to reverse depression. I know that yoga has been proven to change the mapping of one’s brain … and how you translate a person’s different emotions and thoughts, etc. With this story sits a nice blend of psychology and science.

“Look, life is pretty hard. Some people are dealt a pretty bad hand. And there could be no one clear path to help these persons. In this case, all the patients at this facility are really looking for answers—and so does this story. I think ‘Spiderhead’ answers some of them, even as it leaves a lot more of questions up that need to be answered.

“But, as Chris said, the best story is one that makes you think and feel. That’s what I hope to accomplish with this movie. I want ‘Spiderhead’ to be one of the trending movies. It’s so important that I want it to be No. 1 or No. 2 on Netflix, so people can talk about it.” INQ