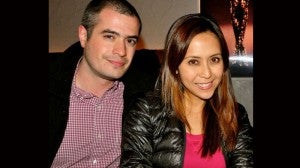 NEW YORK CITY—How many people would bravely admit that while New York may be ‘state of mind’ to many, the city may not be for them?

Pop singer and actress Rachel Alejandro is one of them.

And so after a year of apartment living in the Upper East Side, she and husband, Spanish journalist Carlos Santamaria, packed their bags and went back to the Philippines.

“New York is not for us,” Rachel told The FilAm in an interview at a Times Square restaurant. “We feel that we are not cool enough for New York City.”

By the time this article is published, Rachel and Carlos would have been nicely nestled back in Manila. The couple left in May.

“We really thought, New York is a good place for us to be together alone,” she said. “It’s also a perfect opportunity for me to work on my citizenship.” Rachel has been a legal resident since 2003.

Rachel said they thought long and hard until they got a sign that made it easier to accept the decision to return. Carlos was invited to join another newsgroup in Manila.

“I don’t want to be a hindrance since he’s very passionate about his work and he loves what he does,” she said. Although he has worked in many parts of the world, including Europe and the U.S., the
Philippines is the only country that Carlos has an affinity with.

“He feels he has more in common with Filipinos than any of the other nationalities,” said Rachel.

Rachel went into a litany of clichéd observations about American life.

“I got homesick,” she said. “In Manila, I always have someone to hang out with or help me because my family is there. Here, I’m all by myself. Here in New York, everyone is super busy, you guys work all
day.

“I don’t even drive. As in, I’m lost. I don’t know my way around. Normally I have a driver or assistant everywhere I go. They’re with me all the time. So here in New York, it felt like my security blanket
was taken away from me.

“When we first move in, I did everything—from looking for an apartment to taking charge of the delivery of all our things at home, connecting cable, Internet. At one point you really have to grow up rin.

“As everything around here is expensive, I learn to go for the good deal. Here, you’ll really have to pay on your own. How much is the tip, how to budget. And when you go out of town, where to rent a
cheaper car, things like that that you take for granted if you’re from Manila.”

Like most periods of adjustment, the first few months were tough. Rachel was writing and sending out résumés and looking for an agent.

“(There’s) that thing where you don’t get embarrassed to look for an agent here and you might have to really knock on doors, that you would really lower your pride,” she said.

And then the auditions.

“I had two auditions, but when they called I was in Manila. So I didn’t get the part,” she recalled.

Through it all, Rachel said she loves New York and will miss it dearly.

“I love the parks. I love Central Park’s different times of the year from summer to fall, winter to spring. The only thing I’ll miss was the snow, that one day in October, I was not here…I love my gym, Equinox. It’s my fave thing to do. I used to do it every day.”

Rachel would advise anyone – celebrity or not — who wants to live in the city to brace for a slow beginning and to really commit to staying for a long time. With her family life, temperament and career options, she and the city are not a good fit right now.