Not all ‘kilig’: Real-life sweethearts Gabbi and Khalil on the challenges of doing ‘Love You Stranger’ | Inquirer Entertainment

Not all ‘kilig’: Real-life sweethearts Gabbi and Khalil on the challenges of doing ‘Love You Stranger’ 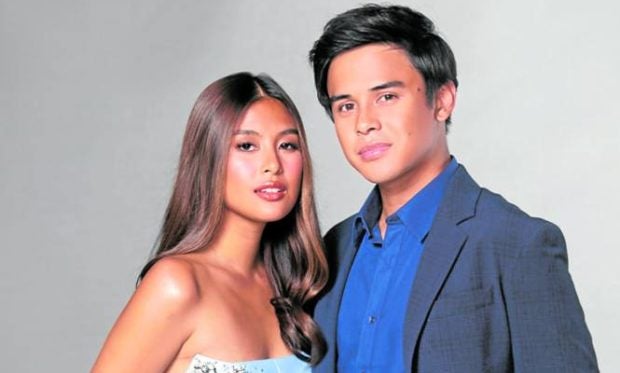 As real-life sweethearts, Gabbi Garcia and Khalil Ramos are already well in tune with each other’s nuances and emotions, allowing them to easily build onscreen chemistry, whether on television, movies, or social media. But while romantic and kilig scenes come naturally to them, there’s one thing that they find a bit tricky—“creating tension.”

“It’s not a disadvantage, but it’s a challenge to create tension. It’s not always going to be kilig. Sometimes, there’s tension and fear, and that’s what we put extra effort on. We have to prepare for those scenes, because we can’t let our personal lives mix with our professional lives,” Khalil told the Inquirer in a recent virtual conference for GMA 7’s new prime-time series, “Love You Stranger.”

And this is especially true while taping for their new show, which has elements of romance, suspense, mystery and folklore.

“It wasn’t our first time to work together, so we already know each other’s dynamic and each other’s work ethics. But this show has a heavy script and story, so it tested us as actors and onscreen partners,” Gabbi said. “I must admit, if it weren’t for Khalil, I would have had a hard time. We collaborated and helped me develop my character.”

“Love You Stranger,” which premieres this June 6, follows LJ (Gabbi), a woman who has been taking care of her mother, Lorraine (Andrea del Rosario), who has an unexplained fear of shadows and strangers. As a result Lorraine hasn’t left her home in 10 years.

Her affliction remains a mystery. But according to legend passed down by the townspeople of Sta. Castela, Lorraine once joined an annual dance ritual that aimed to calm the spirit of Lilom—a shadow creature that emerges during a full moon to take a soul. Lorraine allegedly did something to offend Lilom, which in turn, put a curse on her.

Years later, LJ relocates with her mother to Manila, where she works as a film designer. And as she desperately seeks an antidote to her mother’s condition, she lands a job with a young director, Ben (Khalil), who plans to do a movie about the myth of the Lilom.

They set off to Sta. Castela to begin working on the project. But as soon as they get there, eerie mishaps start to befall the team.

“I have done horror before but this is my first time to do something that’s kind of a mystery thriller. I play a director here, which we don’t often see on television. But since I myself have worked as a director of short films, music videos and digital ads, I felt I got to connect and relate to my character,” Khalil said.

“Being away from our families is something we had to work around, too,” said Khalil, who went on a two-month locked-in taping session with the rest of the crew. “It’s a different experience. There were days when we had to do difficult scenes. That’s where our bond proved to be important. Hindi pwede mag-away!”

This is Gabbi and Khalil’s first prime-time series as a love team. Pressure, they said, will always be there.

“There’s a sense of responsibility for us to do our roles well. But that feeling went away when the creative teams got us involved in the creation of the series. They trusted us, not only as actors, but as creatives who can contribute to bring the characters to life,” Khalil said. “It’s a unique and complex story, and we’re thankful for the level of trust they had in us.”

“There’s pressure. This is also Khalil’s first prime-time show in GMA 7. The script is great so we wanted to deliver. But luckily, we had a support system—the production team, creatives, cast and crew. Eventually, the pressure turned into motivation to do well,” Gabbi said.

“We were together for two months, and every morning, I got to observe their work routines. While I make my coffee, I would already see them reading and memorizing their scripts. It didn’t matter if they only had to film a few or several scenes. I realized that work ethic and professionalism go a long way. As young actors, we feel inspired to emulate them,” Khalil said.

Gabbi, on the other hand, appreciated her seniors’ thoughtfulness and generosity. “You may feel intimidated at first. But once you get to bond with them, you realize how generous they are. They took time to actually get to know us. And I was touched by that,” she said. “Miss Andrea would ask me how life and work is going. We’re still trying to figure out our spot here in show biz, but there they are trying to get to know us on a personal level.”

Khalil and Gabbi have been dating for about five years now, and it seems that their relationship is only growing stronger. How do they keep things kilig for their fans and for themselves? “The kilig factor is about being honest with your feelings and not being afraid of showing vulnerability,” Gabbi said.

“And it helps that we’re best friends,” she added. “Sometimes, we hang out, not necessarily to go on dates or do romantic things … We just love doing things together… Tropa din kami.”

“Fall in love with your best friend—that’s the secret!” Khalil quipped. INQ