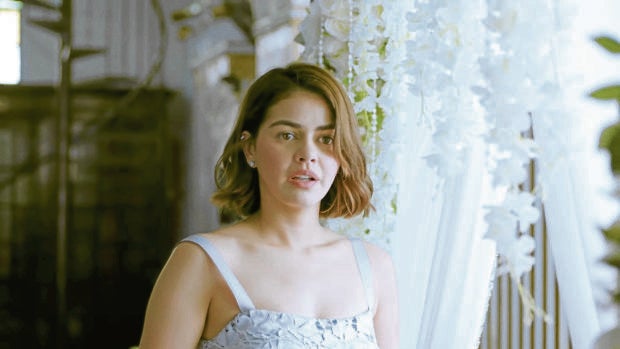 Janine Gutierrez as AM Fernandez

Shortly after the airing of their hit romantic-comedy series “Marry Me, Marry You” in January, onscreen partners Paulo Avelino and Janine Gutierrez did a series of shows in the United States with singer Ogie Alcasid.

Paulo took this as an opportunity to visit his son, Aki, with erstwhile girlfriend LJ Reyes. They are already based in New York. Paulo said he was able to introduce Janine to Aki, too. “We went out to see him once. They just said ‘Hi! Hello!’ to each other,” the actor told reporters during a recent media conference. He added that Janine was also with some of her friends at that time.

How did Paulo introduce Janine to his son, one reporter asked. “As ‘Janine,’ of course, ‘yong anak ni Lotlot (de Leon),” interjected the actress.

When the two faced show biz scribes to promote Prime Cruz’s romantic drama “Ngayon Kaya” recently, they were prodded to either admit or deny the rumor that they are already dating. “Just let people speculate. People will believe what they want to believe, anyway,” said Paulo when asked about the real score between him and Janine. The fact that they are being paired onscreen—shortly after doing “Marry Me, Marry You”—only further fueled the rumor about them having a romantic relationship. “That’s what happens to a lot of actors who are part of love teams, anyway,” Paulo began.

“This is also why I’m not the biggest fan of love teams. I think there are more opportunities if you get paired with different actors. People will continue to speculate, but our main goal here is for the film to be shown to as many audiences as possible. This is not just so that producers can earn, but also so that the filmmaking industry will get the boost it badly needs,” he added.

When asked to describe his relationship with Janine, Paulo said: “We’re doing well.” However, when prodded some more to say whether or not he really is Janine’s boyfriend, the actor replied: “If Janine wants, then I’m OK with it, too. What do you say, Janine?”

To this, the actress gave an evasive reply: “Me? I’m just happy. Recalling the time we shot the film in 2019, and seeing it now after everything else we’ve done, makes me happy. Just like the movie’s theme—if things are meant to be, they will happen—I feel as if that’s what happened to me and Pau. We did other projects together and then, like a full circle, this film will be shown at the cinemas.”

They were also unable to avoid questions related to the kissing scenes they shot for the movie. “Well, Pau purposely made mistakes so that Direk would call for a Take 2!” quipped Janine. 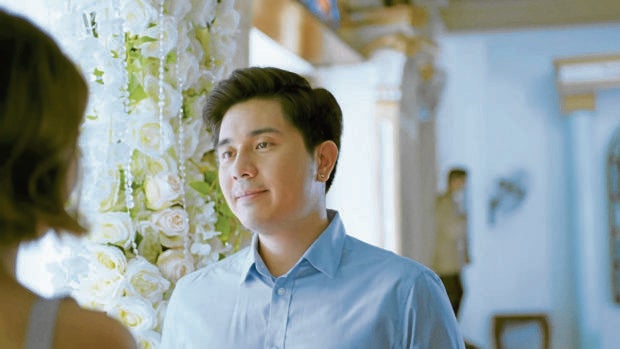 “That’s not true!” replied Paulo. “They took a 360-degree drone shot for one scene. Whenever the dolly would shake, Direk would ask for a repeat. That wasn’t my fault. It was Jen’s (Chuaunsu)! She wrote the script and included all those kissing scenes!”

“Seriously, I was so nervous then,” recalled Janine. “I think we shot the kissing scenes during the first two shooting days. We were just starting and Direk already wanted us to kiss!”

“Also, Janine kept giggling after each kiss. I never found out why. I actually complained to the production team about this, but they chose to ignore me,” quipped Paulo.

Like AM Fernandez, her character in the movie, Janine has also had her fair share of breakups in the past. Does she still believe that true love exists? “I agree with what AM said: ‘If you can believe it with all your heart then the universe will help you achieve what you want.’ No matter what happens to you in life, you mustn’t give up on love.”

Paolo agreed by saying: “Finding true love is not dependent on your age or status. It’s all about timing. Just never stop believing. Finding it might take longer for others, but it will definitely happen, eventually.”

Meanwhile, Janine was likewise asked to describe what her relationship with Paulo was like back when they were still shooting “Ngayon Kaya.” Janine said: “He was my idol. I really wanted to work with him because I’ve watched a lot of his films. Also, when I learned that he’s on board as a coproducer of the project, I realized even more how dedicated and committed he is to his craft.”

Translated loosely, the film’s title means, “What if it happens today?” As a way to relate the title to Janine’s real-life experiences, she was asked what it was that she wished would happen today. To this, the actress replied: “I understand that we are one of the first films to do a theatrical release, postpandemic. I wish for people to really go to the cinemas to see this movie.”

Paulo added: “I was going to say that I wish for ABS-CBN to be able to get back its broadcasting franchise, but that’s a dim chance at the moment, so I’d just wish that the support of the Filipino audience to local films would become stronger. Sadly, we know that the highest grossing movies for the past years aren’t even locally made. We’re so different from India, Thailand or other countries where the audience really patronize locally made movies.”