Taking up the challenge: Lovers Ronnie and Loisa rekindle initial ‘kilig’ in courtship in their 1st teleserye 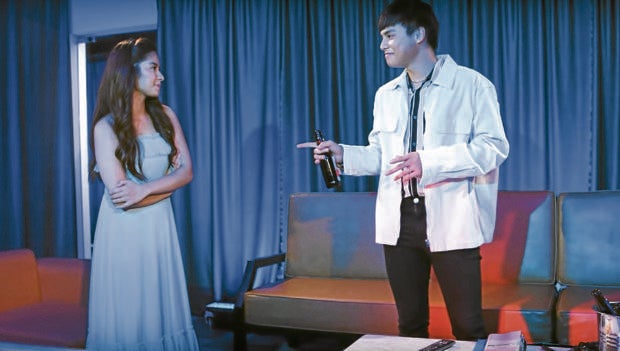 Loisa Andalio (left) and Ronnie Alonte in “Love in 40 Days”

Working with your real-life partner in a romantic-comedy project can also be a drawback, especially if the story tells of characters who are just starting to get to know each other and fall in love, according to Loisa Andalio and Ronnie Alonte.

In their first teleserye as lead actors, titled “Love in 40 Days,” Loisa plays Jane Marasigan, who figures in a car crash, dies, and finds herself in the In Between.

While she is given 40 days to fulfill her “unfinished business,” she meets and falls in love with a guy gifted with the Third Eye, named Edward Montemayor (Ronnie), who is out to prove himself as a scion of a wealthy clan.

“Our directors said they didn’t want to see Ronnie and Loisa, the couple. They said we should take on a fresher approach because we started working on the story when Edward and Jane just met. Direk Manny (Palo, who is codirecting the series with Jojo Saguin) keeps telling me to go back to the time when I was just courting Loisa and recall how I felt back then,” Ronnie told reporters in a gathering shortly after the special screening held at the Santolan Town Plaza in San Juan City.

“It’s challenging for us to make a teleserye with characters who are just beginning to fall in love with each other. We had to discuss how to convince our audience that what we’re feeling is merely the initial kilig in courtship. This was hard for us, but with the help of our brilliant directors and veteran coactors, we were able to pull it off. We hope the audience will be able to notice this. We really gave everything we’ve got in all of our scenes together,” Ronnie beamed.

Loisa explained that this is a challenge also because their supporters know their love story very well. “We admitted to being boyfriend-girlfriend early on because we had wanted to be truthful to them. We hated denying that we care for each other. We don’t want people seeing us holding hands at the mall and then when asked, we would say we’re just friends. We can’t do that. Fake people are no longer ‘in’ these days,” she pointed out.

To the next level

“I agree with her,” said Ronnie. “We’ve decided to admit that we’re already dating because I don’t want to see my girl getting hurt because I can’t be proud of being with her. Denying her as my girlfriend is like insulting her. That’s what actually sets us apart from other love teams. All the things you see from us are all true, even what we post on social media. That’s why, to the other members of love teams out there, just admit what’s really going on off-cam.”

As to the matter of bringing their relationship to the next level, Ronnie said: “We’ll get there, but not anytime soon. Right now, we’re focused on our work and on enjoying our time together. While we’re still young, we plan to save up so that when the time comes that we’re emotionally ready to settle down, tara na! We’ll get there, eventually. Don’t worry, we’re planning for that, although it’s not happening just yet.”

Loisa added: “We don’t want to get into something that serious right now. We’re both still young and we still have a lot to achieve in relation to our career. We’re here to support each other all the way.”

Their secret to a long-lasting romantic relationship, Loisa said, is their ability to maintain open communication and to give each other their full trust. “These days, if you ask me to describe our relationship, I’d say that we’ve already reached the point when we’re like best friends. Tropa kami! We don’t quarrel much. If we encounter differences, we discuss them immediately. We have also learned to adjust to each other’s quirks. I join him in playing ML (“Mobile Legends,” a video game) now,” she explained.

Ronnie said they have likewise reached the stage when they no longer care about what bashers say about them. “We just do what we feel like doing. We express ourselves on social media however we want, although we make sure not to offend anyone. We’re honest and true to our supporters. We really don’t care about the negative comments. What matters is that we’re happy,” he added.

Ronnie also said that more than learning new things about Loisa while working on “Love in 40 Days,” the experience was more like a period of self-discovery. “What I realized was that I still have a lot to learn about this craft. I’ve gotten so much from our directors and from the veteran actors we’ve worked with. They’re all so great at what they do—I guess they won’t last in this business if they aren’t, so I really look up to them,” he began.

“I was having a hard time adjusting in the beginning, but I got into the groove, eventually. These people helped me and guided me. Since I’ve heard negative comments about my past performances, I now always try to prove that I’m worthy of being in this industry by working doubly hard,” declared Ronnie.

Meanwhile, Loisa said she got to observe Ronnie more on the set. “Most of our scenes in our previous projects were added as ‘light moments’ in teleseryes, so they weren’t as challenging. Since this project was really focused on us, I got to see how hardworking Ronnie really is. Even though we’re a couple, there were times when we purposely didn’t see each other so we could concentrate on our characters,” she shared with reporters.