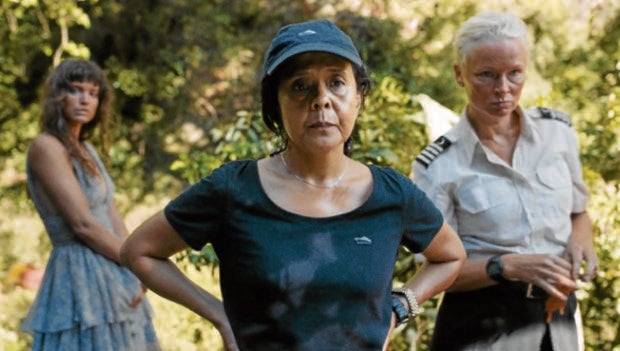 Dolly de Leon (center) as Abigail in “Triangle of Sadness.”

Actress Dolly de Leon, whose film “Triangle of Sadness” earned rave reviews and won the Palme d’Or at the 75th edition of the prestigious Cannes Film Festival, is the type of artist who is not too keen on the idea of reading movie reviews.

However, Dolly said she was well aware that her character Abigail in the satirical film by Swedish director Ruben Ostlund received positive comments from the international press who attended the festival, which ran from May 18 to May 28 in France.

“My children, that’s all they do! They send me all these reviews. My friends on Facebook, they’re always reposting articles. They’re so sweet! Of course, I got to read a lot of them,” she told Inquirer Entertainment in an interview on the night she returned to Manila after being away for over a week.

“If it were me, I don’t like reading movie reviews. This is because if the review is good, you’d feel happy. If it was negative, then you’d feel sad. It’s like what you read is controlling your feelings. I avoid them as much as possible, but this time, I indulged. I read them because they’re all good words. I felt really flattered. It feels good that the project you’ve worked so hard on gets appreciated, especially by the foreign press. Nakakataba ng puso. Sobrang sarap,” she beamed.

“Triangle of Sadness” likewise received an eight-minute standing ovation when it premiered in Cannes. It centers on a fashion model celebrity couple, Carl and Yaya, and a cleaning lady named Abigail who get stranded on a desert island.

Dolly said she auditioned for the role of Abigail when the casting team flew to Manila in 2018. “After that, I communicated with the director via Skype so that he could get to know me better; to see if we’re OK, if we’d be able to understand each other. We also had another Zoom meeting and after that, I was fortunate enough to be picked,” Dolly recalled.

“Here’s a little trivia that I haven’t shared with others yet. I’ve kept the outfit I wore on the day of the audition, even though I don’t normally remember what I wear to anything. I now go to auditions wearing it because I feel that it’s my lucky charm,” she added. “At the audition, I really tried to look like Abigail — dressed down, simple, and without any makeup.”

Asked what she loves — and hates — about playing Abigail, Dolly said: “There is nothing I hate about playing her. I love Abigail so much! I loved playing this woman who is faced with so many challenges in life, but comes out a strong fighter. Despite all the odds, she persevered and kept going, and did her best to navigate this crazy world she’s living in. I wish I was more like her. Ang galing ni Abigail! I wish the Filipino audience would get to meet Abigail.”

Abigail is the toilet manager on a chaotic cruise ship. Articles from international media on the film reveal that Abigail eventually “gets her own back at her bosses” when the ship becomes stranded and the situation gets out of control. She even “gets steamy” with Carl (Harris Dickinson) at some point. 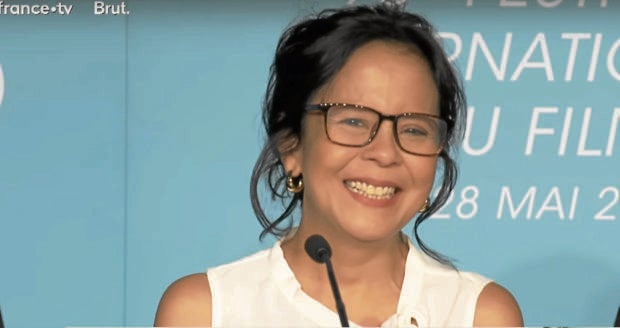 De Leon at a press conference in Cannes.

When asked if she would do the same when faced with a similar situation as Abigail’s, Dolly gave an even more interesting response.

“What did she really do? We don’t know. This question, however, is a good one,” Dolly began. “Let’s put it this way — it’s up to the audience to decide what she did. I can’t really say whether I’d do the same thing. But, if you’re implying if I would do anything that would hurt any other person, definitely not. I try to live with integrity as much as possible. I only kill cockroaches. I can’t even kill those pesky rats!”

The American media company Variety referred to Dolly as “a breakout star,” and “a scene-stealing Filipina actor.” It noted that in Cannes, Dolly would get stopped in the street by enthusiastic fans. But when asked what the most fun part about her trip to Cannes was, Dolly didn’t say anything about all the attention she had received.

“It was fun that I got to hang out with the Pinoys who live there, and also those who traveled all the way there. I enjoyed hanging out with the people from FDCP (Film Development Council of the Philippines). It’s still better when you’re with your kababayan. I felt very comfortable with them,” she said.

“What’s also fun was hanging out with my housemates, directors Joyce Bernal and E del Mundo, and producer Pamela Reyes. They’re going to produce a film called ‘Sam.’ We were happy in our AirBNB — alaskahan, tawanan. I’m glad that I was able to meet producers and managers there. I learned a lot from the trip,” she recalled.

As to what her takeaway from the whole experience was, Dolly said: “An actor should be firm and stable. Hindi pwedeng pusong mamon. This is because, in the world of entertainment, we’re being judged by the work we put out. We can’t be weak. Every day, we open ourselves up for judgment. We have to be strong, resilient, adaptable, and loving at the same time. That’s what everybody needs in any kind of job — you have to have a strong and deep love for what you do.”