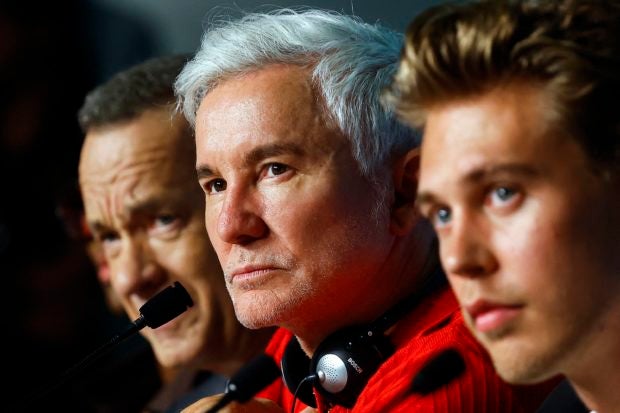 CANNES — Film director Baz Luhrmann said the reaction of Elvis Presley’s family to his film about the flamboyant American icon, which premiered at the Cannes Film Festival, was “the greatest review of my life.”

The film chronicles over 20 years of the life of the King of Rock and Roll, throwing the spotlight on the relationship between Presley, played by Austin Butler, and his enigmatic manager Colonel Tom Parker, played by Tom Hanks.

Family members felt the biopic reflected “the humanity of the man,” Luhrmann said at a packed press conference at the festival Thursday. He recounted the reaction of the singer’s ex-wife, Priscilla Presley.

“She said, ‘If my husband was here today, he would look him in the eye and say, ‘Hot damn, you are me!’” Luhrmann said.

Butler explained that over two years he put the rest of his life on hold as he “went down the rabbit hole of obsession,” embarking on the project with the “unrealistic expectations” he could make his face identical to that of Elvis if he worked hard enough — likening this approach to going to a wax museum.

“What is really important is that his soul comes out,” Butler said he realized.

“I think you’re always going to grapple with whether or not you’ve illuminated something real and human,” said Olivia DeJonge, who played Priscilla Presley.

Hanks recalled that Luhrmann sold him on the role of the star’s manager, whom he described as a mercurial and brilliant man who made sure he lined his own pockets.

“Here was a guy who saw an opportunity to manifest a once-in-a-lifetime talent into a cultural force,” he said.