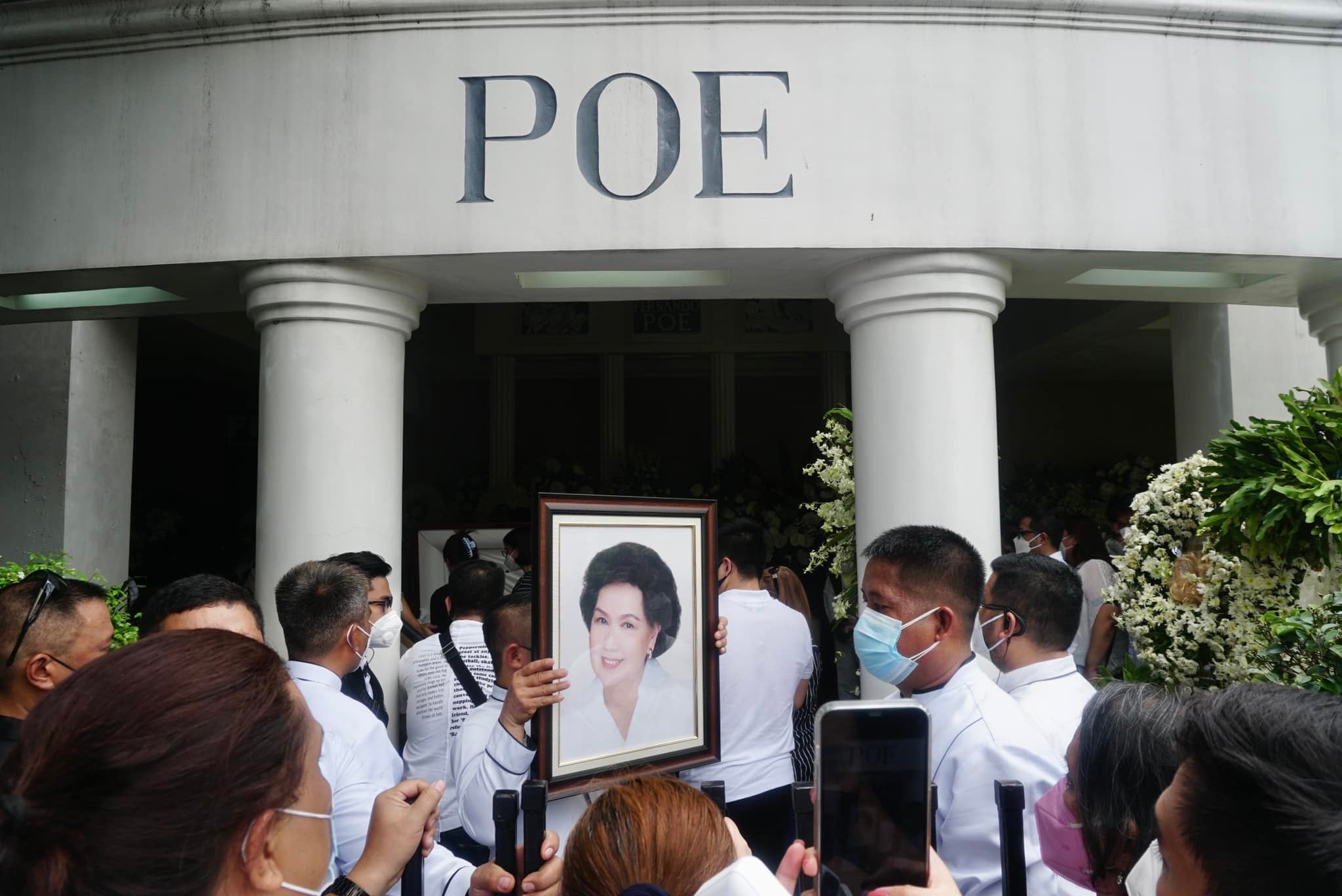 Family, close friends and fans bid farewell to veteran actress Susan Roces as she was laid to rest next to her husband, Fernando Poe Jr., at the Manila North Cemetery on Thursday, May 26, 2022. Photo from Sen. Grace Poe’s Facebook page.

MANILA, Philippines — Loving and funny stories about “tiger” grandma and Philippine film icon Susan Roces as remembered by her friends and relatives served as a fitting farewell to the veteran actress on Wednesday night.

During the final night of her wake at the Heritage Park in Taguig City, Roces’ immediate family and “allies” in the entertainment industry recounted their fondest memories with the late actress.

Her grandchildren with her only child, Senator Grace Poe, separately paid tribute to their “Mama Susan.”

The “Queen of Philippine Movies” was laid to her final resting place – right next to her husband, “Da King” Fernando Poe Jr. – on Thursday at the Manila North Cemetery.

Nikka Poe Llamanazares, who introduced herself as Roces’ “favorite” grandchild, shared how her grandmother was her “biggest” supporter – from her Directioner phase to when she grew older and pursued visual art.

Nikka described herself as “lucky” for having known Roces “until the very end of my childhood,” citing how she was not able to personally know her grandfather, Fernando Poe Jr., who died the year she was born.

“The earliest memory I have of her was when I was still in my god-awful One Direction phase and I needed an audience to showcase my superb singing skills to – and that was Mama Susan, which I believe was against her will,” she said in her eulogy, eliciting laughter from the crowd.

“No matter how out of tune I probably was, I was still met with a round of applause from my biggest and only supporter at that time,” she added.

Roces remained as supportive as ever when she grew up, according to Nikka.

“Fast forward to my very last memory of her and she’s still the same. I do pursue visual art, if we talk about my last memory of her face-to-face, it would be when I showed her the new pages of my sketchbook which is very rare, even my mom doesn’t see it,” she said.

“She’d tell me what I was doing was correct, was worth it, and something I should continue to pursue because it made me happy,” she added. “She was my number one supporter even if I didn’t ask for any support.”

Nikka likewise recalled her last conversation with Roces – to thank her grandmother for her art supply gifts.

“It was all for me and it was more than I believed I was worth. Till the end, she supported my art whether I knew I needed it or not,” she said. 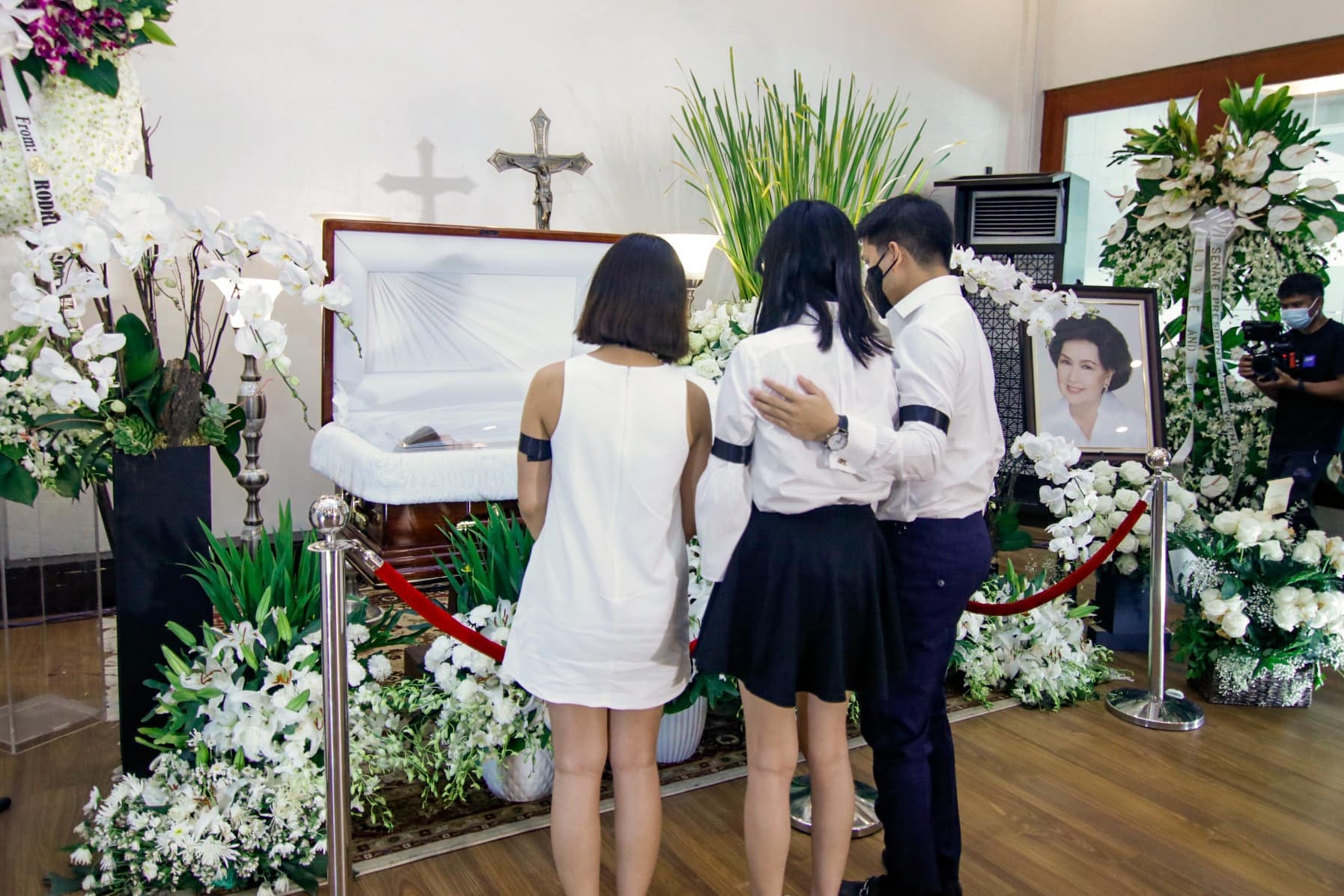 Susan Roces’ grandchildren pay respect to their “Mama Susan” at the Heritage Park in Taguig City before her casket is transported to the Manila North Cemetery on Thursday, May 26, 2022. Photo from Sen. Grace Poe’s Facebook page.

Hanna, for her part, remembered her grandmother for her timeless beauty and wisdom.

“Almost everyday, I will sneak into her dressing room and find all her make-up and dresser and try them on without her knowing but I’m pretty sure she knew. Eventually, she would show me which ones are her favorite and the ones she would use whenever she would go taping,” she said.

“When she saw how fascinated I was by all of these things, she made it a point to sit down with me every time she could and put on make-up with me,” she added.

In particular, she recollected how her grandmother purchased for her the brown heeled-boots she had been eyeing. “This just goes to show that although she already has the title of being The Susan Roces, Queen of Philippine movies, she was still so selfless and humble.”

For his part, Brian Poe Llamanzares, Roces’ eldest grandchild, joked about having not only a “tiger” Mom but also a “tiger Lola.”

“I was scared of my mom, but I was even more afraid of my Lola. She never demanded high grades from me, or medals. She asked for things that were more difficult: humility, integrity and staying true to myself,” he added.

He recalled how he tried to follow the footsteps of his grandfather and pursue being a celebrity. He said Roces summoned him to her house.

“She told me ‘Don’t try to be like your Lolo, try to find your own path.’ At that time, I took it personally…But I realized that what she was actually trying to tell me was to be myself,” he added.

Meanwhile, Poe expressed gratitude to the woman she said she “owes everything to.”

“For now I’ll say goodbye. I will just say that in my heart, you will be the woman that I most admire and you will be the woman that I’m most scared of. In the past. I kept telling people – my staff – please don’t tell her I have a hearing today that will be televised because for sure she will call me and give me tips about what I said or what I look or what’s the best camera angle for me,” she said.

“But now, you’re not there anymore physically, but it’s even more scary because I know you’re around, so even in my thoughts you’ll be present,” the senator added.

Actress Bibeth Orteza was also among those who delivered a eulogy for Roces.

Orteza recounted her days as one of Roces’ fans, telling a story of how she used to forge the late actress’ signature in order to brag about it with her classmates.

Towards the end of her eulogy, she described Roces as a genuine person and a loving and caring friend.

READ: Susan Roces laid to rest next to FPJ at Manila North Cemetery

Roces passed away on Friday, May 20, due to cardiopulmonary arrest. She was 80.