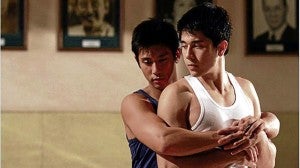 Maja Salvador took home the Best Actress trophy for her portrayal in “Thelma” while Art Acuña won Best Actor for his performance in “Niño.”