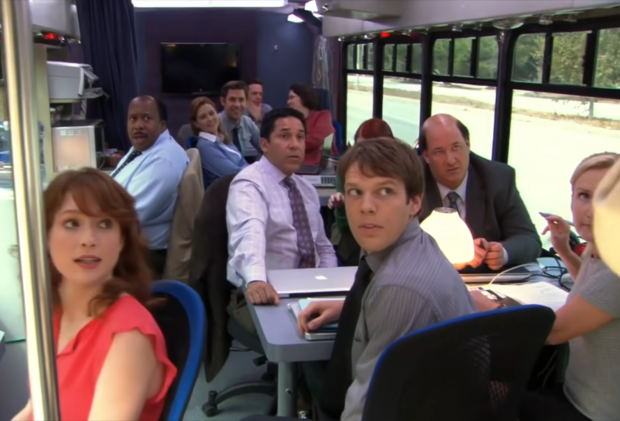 “The Office” nearly put some members of its cast and crew at risk in its “Work Bus” episode, as actors Jenna Fischer and Angela Kinsey revealed they “almost died twice” while filming it back in 2012.

Fischer and Kinsey, who played Pam Beesly and Angela Martin in the hit American sitcom, disclosed that they now refer to the “Work Bus” episode as “Death Bus.” This is based on excerpts of their new book “The Office BFFs: Tales of the Office from Two Best Friends,” from Mashable and Insider last Tuesday, May 17.

In the episode directed by “Breaking Bad” star Bryan Cranston, Jim Halpert (John Krasinski) convinces Dwight Schrute (Rainn Wilson) that their office is too dangerous to work in and that they should vacate their building. But instead of giving the employees a few days off, Dwight converted a bus into their office instead.

Fischer stated that 14 actors, four crew members, desks, chairs, lamps, printers, a water cooler, a microwave, a TV and a coffee maker all fit in the bus while filming.

“It was a very hot day and whenever we started filming, the air conditioning on the bus had to be turned off because it was too noisy,” Kinsey was quoted as saying, describing the bus as a “moving hot tin can with no air.”

“I thought Brian [Baumgartner] and Creed [Bratton] were going to melt. Oscar [Nunez] looked dead inside,” she added. Baumgartner and Nunez portray the characters Kevin Malone and Oscar Martinez, respectively, while Bratton plays a fictionalized version of himself in the series.

A scene in the said episode also had Dwight drive “like a maniac” and have his co-workers fall to the sides of the bus. However, when the scene did not look authentic enough onscreen, a stunt driver joined the cast on the vehicle.

“The stunt driver swerved HARD. I mean he cranked that wheel like Cole Trickle in ‘Days of Thunder,'” Kinsey said in the book, referencing the 1990 sports action film starring Tom Cruise.

Kinsey recalled that the cast were all “smushed up” against the side of the bus, as the office furniture, props and set decor were not securely tied down.

“Papers were everywhere. I caught our desk lamp as it slid into my lap. A few people fell on the bus floor, and we could barely see them because so many things had fallen on top of them,” Kinsey narrated.

Given their problems with the air conditioner, the show’s crew had a portable air-conditioning unit installed later in the shoot—but that came with problems as well.

When they resumed filming, Fischer noticed that the bus smelled funny. Apparently, the air-conditioning unit’s intake hose was placed next to the bus’ exhaust pipe.

“[That] hose was sucking in exhaust and blowing it straight into the sunroof of the bus. We were all being slowly poisoned. Or not so slowly, actually,” Fischer recounted.

The cast and crew of “The Office” evidently survived the day of shooting and continued to wrap up the show’s final season. The series’ ninth and last season aired on May 16, 2013.  /ra

Read Next
‘Squid Game’ puts humanity to the test again in season 2, creator says
EDITORS' PICK
Powered by style, innovation and passion
Authors unbowed after gov’t ‘purge’ of books
Taiwan’s foreign ministry thanks U.S. for maintaining security in Taiwan Strait
House energy committee chair Arroyo bats for cheap electricity
A laptop that maximizes your WiFi so you can maximize your productivity
Writers’ groups join outcry over KWF move
MOST READ
Arjo Atayde reveals proposal to Maine Mendoza was ‘more than a year’ in the making
‘FPJ’s Ang Probinsyano’ officially ends after nearly 7 years
Most wanted person in Cebu arrested — PNP
Pagasa: Cloudy Saturday with possible rain showers; LPA spotted outside PAR
Don't miss out on the latest news and information.