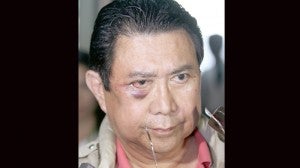 Lawyer Jovito Barte told the Inquirer Wednesday that the witnesses, passengers of Cebu Pacific Air who saw the scuffle last month, testified that they saw two encounters between Santiago and his cohorts, and Tulfo, before the brawl started.

The fight, dubbed the “Thrilla in Naia,” was recorded and posted online, becoming viral overnight.

“When Raymart said, ‘Hindi pa ako tapos (I‘m not yet through),’ you have to check it with the circumstances,” Barte said, referring to the actor’s remark, clearly audible in the video, as both men were being restrained by airport police.

With that kind of remark, “there was intent to inflict serious physical harm,” he continued.

According to Barte, Santiago himself confirmed his earlier encounters with Tulfo during previous television interviews. The lawyer recounted that the actor described the video as merely “the latter part of the encounter.”

The first encounter between Santiago and Tulfo happened when the actor approached the columnist to make him yield his cellphone. The latter used it to take photos of the actor’s wife, Baretto, who apparently berated an airline staffer for baggage that had been offloaded at their embarkation point without their knowledge and permission.

When the columnist did not surrender his phone, Santiago threw two punches at Tulfo, who dodged both blows, Barte said, citing the accounts of the witnesses. The columnist smiled afterward as airport security personnel intervened and separated the men from each other.

Minutes after the first incident, the actor pursued Tulfo, demanding that he give up his cellphone. Then, Santiago’s companion, Edoardo Atilano, tried to “provoke Tulfo” by slapping him, according to the witnesses. Tulfo did not retaliate, they said, according to the lawyer.

“He was just trying to laugh it out,” Barte said.

As he smiled and got his bag, Tulfo was attacked for a third time, and this too was recorded on video, according to the lawyer.

Barte said the legal team was thinking of upgrading the charges in light of the witnesses’ statements. The lawyer said Santiago appeared bent on harming the columnist, a martial arts expert.

“The attack against my client was near fatal. Mr. Tulfo said he was running out of breath when Raymart placed him in a headlock,” Barte said. “If he wasn’t released from the headlock, he could have been gone, or suffered paralysis at the very least.”

“Good thing he has a good physical build,” he added.