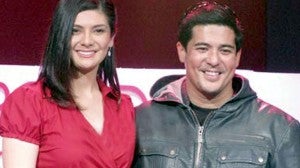 SAN FRANCISCO—Aga Muhlach said his wife, Charlene Gonzales, has given him the go-ahead to enter the political arena in 2013.

Aga, 42, has been very vocal about his plan to represent the 4th district of Camarines Sur in Congress. “We’ve discussed this. Charlene just said, ‘In case you decide to run, you have to promise to close your eyes and ears to what people will say against you.’ She said I should not show any sign of weakness and that, in times of self-doubt, I should go back to my desire to help people.”

Aga said he avoided joining politics for many years, but that he recently came to a point when he “just wanted to do something different, to pay back the people who supported me all these years.”

He admitted that Camarines Sur Gov. Luis Raymund “LRay” Villafuerte was a major influence on his decision. “He’s a good friend. He convinced me to help this poor district. He said whatever little help I could give to improve the lives of the people there would be really appreciated. I told myself, kaya ko ’yon. I   can make a name for this district, I can encourage business people to invest there.”

Camarines Sur is the home province of Aga’s dad Cheng Muhlach. “There’s this notion na kapag pulitiko puro manloloko. I will prove this wrong. I’ll show people that one can actually be a good politician,” said Aga during a media gathering recently at the Mandarin Oriental Hotel here on Sansome Street, where TV5 inked a deal with American cable provider Dish Network.

Aga, who hosts the TV5 show “Pinoy Explorer,” said he intended to remain a Kapatid for as long as his network bosses wanted him to. “I’m very loyal, wala naman sa ugali ko ang palipat-lipat. It’s unfair for us (TV5 artists) when people say we abandoned our former home network because we were offered large sums of money. I moved out of ABS-CBN long before I sat down with TV5 to negotiate. I have nothing against ABS-CBN, but I was impressed with how TV5 supported Willie [Revillame, host of ‘Wil Time Bigtime’]. The network gave him its full trust.”