One can enjoy even a ‘jukebox musical’ 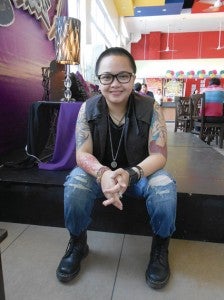 Bad reviews of a show won’t matter, especially if that show has proven itself to be a hit among audiences.

That’s what MiG Ayesa pointed out when he and other cast members of the Philippine production of the American stage musical “Rock of Ages” met the media recently. “It’s not meant to be Shakespearean or high-falutin’ stuff. It’s about people having a good time. It’s just a show full of poop jokes and Whitesnake songs,” MiG said of the show, adding that it revels in “the fact that it’s lowbrow.”

The Manila-born, Sydney-raised MiG—who traces his Filipino heritage to the Legarda clan—plays Stacee Jaxx, a rock star called upon to perform at a benefit gig to help save The Bourbon Room, a club on the Sunset Strip in Los Angeles, from demolition. He first portrayed the character in the musical’s US tour in 2010.

Some of the criticism heaped on “Rock of Ages”—which debuted in an LA club in 2006, moved on to Broadway, the West End and Toronto, and is now a film with Tom Cruise as Stacee—have to do with its “thin plot concocted from show biz clichés.”

A few of the musical numbers may disappoint rock fans who tend to thumb down songs of 1980s glam-metal hair bands featured on “Rock of Ages”: “I Wanna Rock” by Twisted Sister; “Here I Go Again” by Whitesnake; “Final Countdown” by Europe; “Every Rose Has Its Thorn” by Poison.

However, the creator of this “jukebox musical,” Chris D’Arienzo, was wise enough to include a mish-mash of hits that would please everyone: Styx (“Too Much Time On My Hands”); 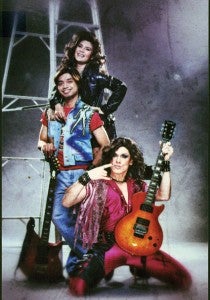 But isn’t a tune like Survivor’s “The Search Is Over” a bit too mushy?

Calvin Millado, who portrays Hertz Klinemann, a German property developer who wants to get rid of the Strip’s sex-drugs-rock-n-roll image, said of the musical: “You just have to go out there with a mindset that you’re gonna have fun. We describe it nga as parang rockeoke. It’s a gag show. It wasn’t meant to make people think. It’s very visual.” 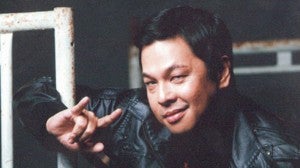 Jett Pangan as Lonny Barnett, the show’s narrator, admitted that he did not listen to hair bands in the ’80s because he was more into punk and New Wave back then. But he said he liked Night Ranger’s “Sister Christian,” which the cast performs as the second number.

“The best thing about the musical is that you’ll find yourself singing along unconsciously,” said Nyoy.

“Without the excess and flamboyancy of the ’80s, grunge would not have happened,” quipped MiG, who gets to make out with the female lead, Vina Morales, in a scene set in the men’s room of the club, while Foreigner’s “I Want To Know What Love Is” plays.

Read Next
Katrina Halili now a conservative mom-to-be
EDITORS' PICK
Every Filipino home can now be a smart home with realme TechLife
PLDT Home Prepaid WiFi customers now under the care of Smart
Nestlé Philippines’ ‘NESCAFÉ Plan’ bags Grand Anvil at PRSP 56th Anvil Awards
Wesley So officially a US citizen
‘Pilgrim of peace’ Pope Francis heads to war-scarred Iraq
WHO: Arrival of vaccines in PH ‘a powerful step’ towards economic recovery, normalcy
MOST READ
Kris Aquino dispels rumors on son Josh getting married, thanks Ogie Diaz for defending him
Wesley So officially a US citizen
Ginebra trades Slaughter to NorthPort for Standhardinger
LTO’s P500-M deal for screws draws scrutiny
Follow @Inq_Lifestyle on Twitter
Don't miss out on the latest news and information.