‘We Own This City’: Cops behaving badly

Scene from “We Own This City” —PHOTOS COURTESY OF HBO

The gripping six-part series “We Own This City” takes viewers into the underbelly of police brutality, criminality and corruption. But while we see this true-to-life tale taking place in Baltimore, it’s also a cautionary story that happens in so many places around the world. This makes the series a must-see for people everywhere—and for Filipino viewers, particularly—who are fed up with the worsening culture of impunity.

Created by George Pelecanos and David Simon (“The Wire”) and directed by Reinaldo Marcus Green (“King Richard”), the show—which premiered last Tuesday at 9 a.m. and 10 p.m. on HBO and HBO Go and has since generated a 93-percent approval rating on Rotten Tomatoes—is based on the book “We Own This City: A True Story of Crime, Cops and Corruption” by Baltimore Sun reporter Justin Fenton.

In scenes that are as harrowing as they’re infuriating, “We Own This City” contextualizes the polarizing war on drugs as it chronicles the rise and fall of the Baltimore Police Department’s Gun Trace Task Force (GTTF), where the policies of drug prohibition and mass arrest are used to wreak havoc on a city of 620,000.

In merely five years since the GTTF was assembled in 2007, over 300,000 (mostly unconstitutional) pedestrian stops, searches and illegal arrests were reported. In this city, unprovoked police “shakedowns” could happen between 10 to 50 times a night. The cops-turned-bandits would then frame their “suspects,” rob their homes, steal their money and sell the guns or drugs they find. 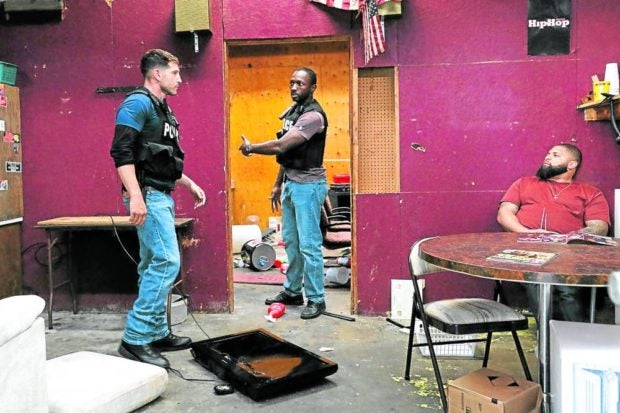 As Time magazine noted, the rogue police force, led by its cocky leader Sergeant Wayne Jenkins (the award-worthy Jon Bernthal, who’s deliciously despicable in the role), is “believed to have stolen at least $300,000, 43 pounds of marijuana, 800 grams of heroin, three kilos of cocaine, and hundreds of thousands of dollars’ worth of jewelry.”

When police killed young African-American Freddie Gray during an arrest in 2015, it triggered riots that forced the Baltimore Police Department to clean up its act. It soon emerged that a group composed of eight cops had for years engaged in racketeering and abuse with impunity, extorting money and drugs from dealers.

“It’s a true story,” reiterated David Simon during the press con that Inquirer Entertainment took part in before the series was launched early this week. “Baltimore is where the scandal actually happened, but what happened there is common to many American cities. As a consequence, it destroyed police work in a lot of fundamental ways.”

Aside from David, George Pelecanos was also at the media con, along with actors Jon Bernthal, Jamie Hector (as homicide detective Sean Suiter), Josh Charles (Daniel Hersl of the GTTF), Darrell Britt-Gibson (Jemell Rayam of the GTTF) and Wunmi Mosaku (as Nicole Steele, the lawyer assigned to the Department of Justice’s Civil Rights Division investigating the case).

For his part, George said that he was proud of the fact that the show gave everybody a voice.

“The police had their say, the citizens had their say,” he said. “And even though there are a lot of people who have been negatively impacted by growing up with having their rights violated by police, this isn’t a show that’s meant to sow hate on the police. We were trying to find a way to be able to move forward. How can we make it better?

“Having said that, I want to throw this to Rei (Marcus-Green, the director) because he’s had a unique upbringing, being both Black-Puerto Rican and also growing up on Staten Island. So, the perspective that he brought to this is a little more balanced.” 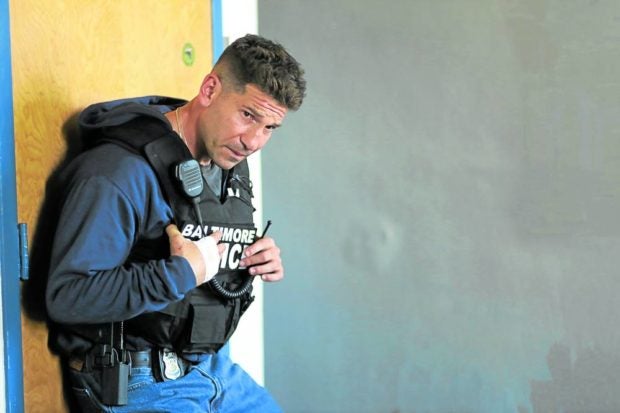 Rei stated, “Look, there’s a huge responsibility stepping into this. My father worked for the Department of Investigation, so while he didn’t wear a uniform, he had a gun and a shield, and he worked with lots of cops. And if you know anything about Staten Island, you know that there are a lot of cops living on Staten Island.

“I grew up having a lot of respect for what cops do, but there was also a lot of disdain for some of the practices. This series really hits at the heart of that.

“I don’t think anybody signs up to be a cop to do the atrocious things that these folks ended up doing. The intentions are usually good, but then they’re somehow misguided along the way.

“The show tries to find the humanity in all of these characters, and understand the things that led them to make those very bad decisions. What George and David did so well was to create a path for us to have that discussion.”

Our Q&A with the show’s cast and creative team:

For the actors, what has been the most surprising change that you’ve noticed within you in response to this experience?

Jon: This show tackles profoundly sensitive, complicated and nuanced issues that have real, deep meaning to all of us, as Americans, parents and citizens. So, I was unbelievably grateful to be able to explore these stories with this team. For me, the greatest thing about this kind of work are the connections and friendships you make—that’s the biggest effect it’s had on me.

Darrell: To piggyback on that, this is the hardest job I’ve ever had to be a part of. I mean, I’m named after a man who was shot and killed by police. I have also been victimized and beaten up by police in my own neighborhood. As a young Black man in America, I’m not special in that case.

So, to be able to step onto the other side of this was tough. This is different because I was coming off the film “Judas and the Black Messiah,” where I played one of the Black Panthers, who fought against [corruption and racism]. I have had a lot of sleepless nights because of this.

Another thing, I’ve never had a good experience with a police officer for much of my entire life. I don’t say that as a “badge of honor.” So, to be on a set and have to put that vest on was something else.

But I have since made friends with a great cop, who just passed away last week. Because of that, I now hold some hope that I can also have good run-ins with police officers. Still, that doesn’t change the fact that I’m a Black man in America who has to deal with these issues. 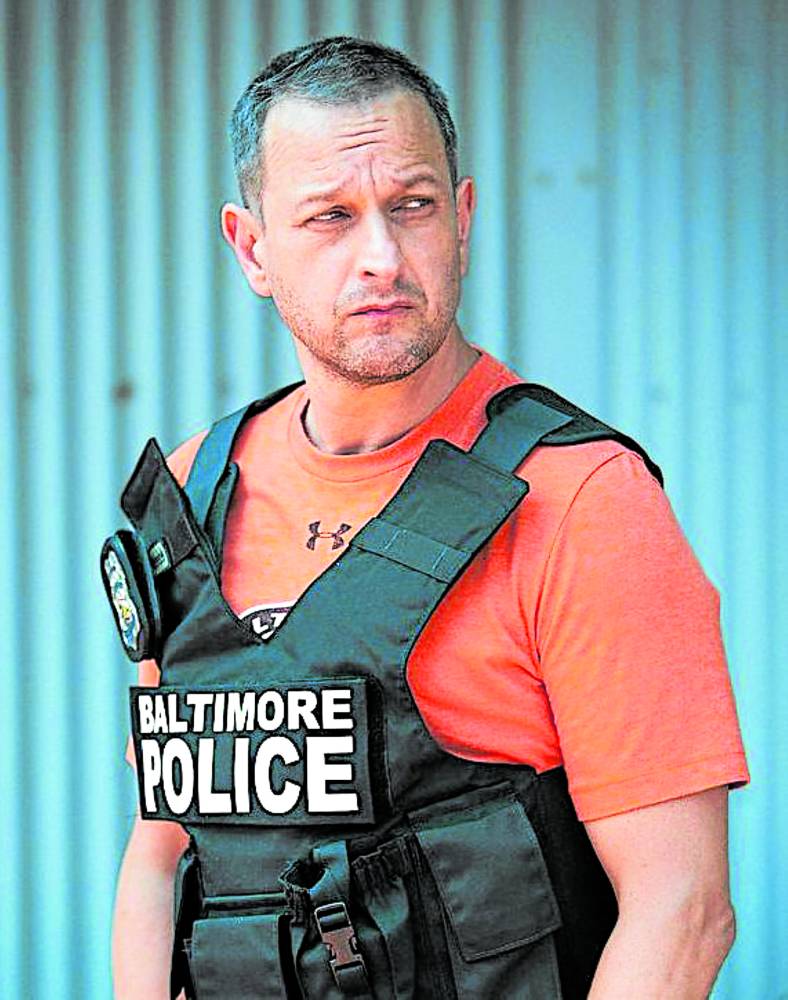 Josh, you come from Baltimore. What are your thoughts about this?

Josh: It’s very personal to me because it is my city, and I love it … but it could be any city in America, you know? It touches me in a different way because, as we see in the news now, the crime and murder rates are rising even more. And there’s a sense of hopelessness that a lot of people feel.

It’s a city that I deeply care about, so I’m always trying to find ways to help it any way I can. Being a part of this story, however unpleasant it sometimes gets, helps raise the issues out there and introduces the layers and nuances to this story.

So, I was just taking everybody’s comments in and reflecting on them. You know, around the time we started filming, Jon and I went on a ride-along with some police in the Southwest.

And I’m sure Jon remembers this: The cops were pulling some guys over. They had drug paraphernalia in their car, and I thought they were being relatively respectful to the guys.

But the young men were really upset that they were being taken out of their car and asked to sit down. One of them said, “You don’t understand what this is like”… as if he was referencing the characters from the Gun Trace Task Force, and kind of trying to explain to the cops how profoundly affected they were by the actions of the guys that we were playing!

I looked at Jon, and both of us were, like (sighs)… even just saying this now makes me realize the sense of responsibility there, of what this particular group in the police department had done, and the reverberations of that for so long! In that moment, I felt how important it was to tell this story as honestly and accurately as possible.

Was there any form of police participation in this? Did you get any pushback from them?

David: The journalism surrounding the story it’s based on is pretty sound. I mean, this is a book by Justin Fenton, the police reporter for The Sun who covered the Gun Trace Task Force scandal and a lot of the policing events in this era.

Justin’s reporting is pretty rock-solid. So, the city was tolerant of the fact that we were telling a story that, while unpleasant, comes with a purpose.

There’s also an argument that we’re making with the show that we feel is important, and it’s this: We have to end the drug war!

We have to take this overlay of warring against the most vulnerable communities, and we have to discard it because it’s neither solving anything nor addressing addiction in any meaningful or healthy way. It’s just filling up prisons and leading the authorities away from doing actual police work. It brutalizes and degrades citizens and communities.

Like, there’s an argument embedded in this piece that, once we got around to explaining ourselves, the city, to its credit, was tolerant about. That’s probably the best way I can put it.

TAGS: series, We Own This City