LONDON – Tom Cruise attended the European premier of his new film “Rock of Ages” in London’s Leicester Square on Sunday and was joined on the red carpet by fellow stars Julianne Hough, Russell Brand, Paul Giamatti and Mary J. Blige. 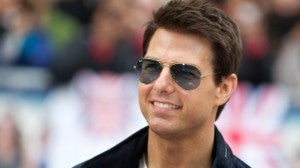 American actor Tom Cruise arrives for the European premiere of the film 'Rock of ages' at the Odeon Cinema in Leicester Square in London, on June 10, 2012. AFP PHOTO/ANDREW COWIE

Cruise plays the tattooed — and frequently shirtless — rock star Stacee Jaxx in the tribute to the big-haired, big-riffing glam metal sound of the 1980s. But when asked if he had the choice between the life of a movie star or a rock star, Cruise said he would to stick with his day job.

“I love my job, and I feel very privileged to be able to do it. It has been a dream of mine, and I love what I do,” he said.

However, the “Mission Impossible” star makes a very convincing rocker, and he had to embrace all of his character’s rock ‘n’ roll habits. These included being hands on with his female co-stars.

When asked about this, the ever cool Cruise said he took Jaxx’s characteristics in stride. “It was a character, and it was something where you were trying to find where we can find the comedy. Comedy is different, from Les Grossman to this kind of character, and there is no half way with rock ‘n’ roll. You have to go all of the way, particularly with Stacee,” he laughed.

Based on the musical hit, the movie tells the story of small town girl Sherrie (Hough) and city boy Drew (Diego Boneta), who share a dream of reaching dizzying heights in Hollywood. Their glittery romance is set to a rock ‘n’ roll soundtrack that includes hits from Def Leppard, Foreigner, Bon Jovi, and Poison.

Recording artist Blige, who also rocks out in the film, said she enjoyed embracing rock ‘n’ roll for the part. “It felt good. I mean it is the same energy as a lot of the songs that I sing, so it was very easy to do,” she said.

The film has its fair share of intimate moments, with unlikely couples locking lips.

Actress Malin Akerman, who gets the pleasure of kissing Cruise, shared her words of wisdom on how to prepare for such a moment.

“A lot of mints, a lot of mints. You never want to kill your co-star. But you can’t really prepare for that. You know it is going to be a funny moment. I loved it in the script, and you get there on the day and you just go for it,” she said with a laugh.

“Rock of Ages” is being released in the U.S. and the U.K. on Friday