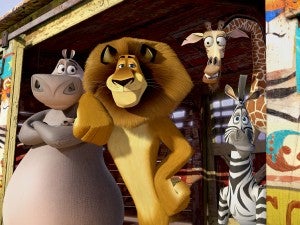 This film image released by DreamWorks Animation shows, Gloria the Hippo, voiced by Jada Pinkett Smith (from left), Alex the Lion, voiced by Ben Stiller, Melman the Giraffe, voiced by David Schwimmer, and Marty the Zebra, voiced by Chris Rock in a scene from "Madagascar 3: Europe's Most Wanted." AP/DREAMWORKS ANIMATION - PARAMOUNT PICTURES

The animated “Madagascar 3,” the third installment in the wildly popular franchise starring Ben Stiller about escaped New York zoo animals, opened with a bigger-than-expected $60.4 million debut, according to Exhibitor Relations.

The pair bumped “Snow White and the Huntsman,” which was fairest of them all last weekend, off the top of the charts into third place.

The film starring Charlize Theron and Kristen Stewart of “Twilight” fame, which offers a new twist on the classic fairy tale, brought in $23 million. It has total takings of $98.5 million so far.

The reunion of Will Smith and Tommy Lee Jones as secret agents battling aliens living on Earth in the sci-fi comedy sequel “Men in Black 3” brought $13.5 million for fourth spot.

In fifth place was comic book superhero blockbuster “The Avengers,” pocketing $10.8 million, which has so far raked in more than $570 million in North America alone.

“The Best Exotic Marigold Hotel,” a comedic drama about British retirees in India, took in $3.2 million for sixth place.

Keeping its seventh place was romantic comedy “What to Expect When You’re Expecting,” about five interconnected couples sharing the experience of having a baby, with $2.7 million.

Next was the big-budget but critically panned “Battleship,” with $2.3 million in box office receipts.

In ninth was comedian Sacha Baron Cohen’s “The Dictator,” at $2.15 million.

Final figures are due out Monday.