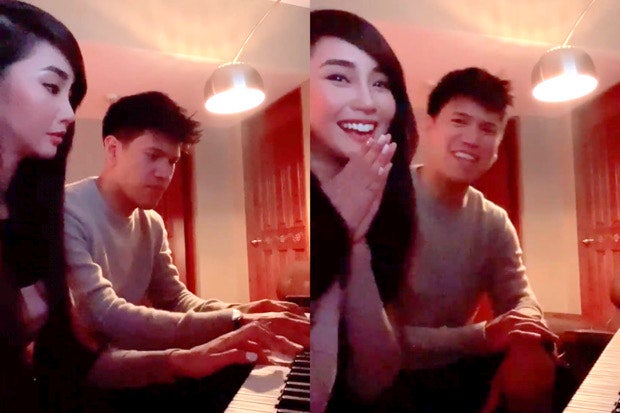 Alodia Gosiengfiao treated fans anew to a glimpse of her bonding moment with her rumored boyfriend, entrepreneur Christopher Quimbo.

Gosiengfiao and Quimbo played Jaymes Young’s “Infinity” on the piano while sitting beside each other, as seen on her Facebook page yesterday, April 23.

Quimbo sang a part of the song which goes “I love you for infinity” while looking at the vlogger-cosplay star. Gosiengfiao, meanwhile, hummed and shared a few glances with him.

Gosiengfiao earlier showed herself in a Palawan trip with Quimbo, leading fans to speculate that he is her new special someone. The two were seen posing by some rocks and making a heart shape with their hands.

Meanwhile, Gosiengfiao confirmed in November last year her breakup with fellow vlogger Wil Dasovich, which came “a while” after the actual split happened. Though she did not disclose the reason for their breakup, the cosplayer stated that they “tried to work things out many times but some things are not meant to be.”

Gosiengfiao also received a bouquet of sunflowers last February from a supposed secret admirer, who also seemed to have asked her to go on a Valentine’s date. JB