2NE1 reunites on stage after over six years, sings 'I Am the Best' at Coachella 2022 | Inquirer Entertainment
Close
menu
search 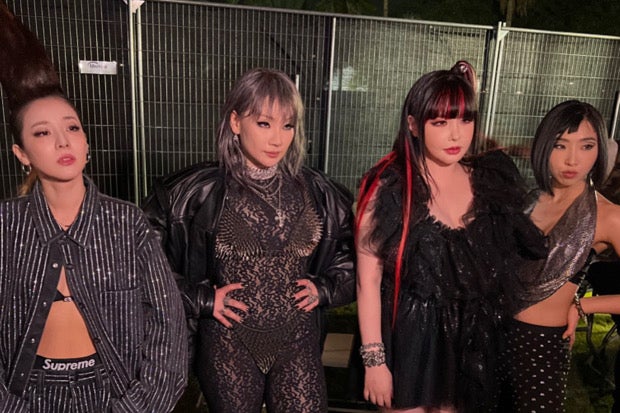 K-pop girl group 2NE1 has reunited at the Coachella Valley Music and Arts Festival in California, after more than six years, surprising fans with a performance of their hit song “I Am the Best.”

2NE1 members Dara (Sandara Park), Minzy and Bom joined CL at the Coachella stage for the 88rising’s “Head in the Clouds” set today, April 17 (April 16 in the United States).

“We the best,” the music company said on its Twitter page while showing the four members in the event.

Dara, Minzy and Bom’s appearance came after CL’s solo performance of her songs “Hello Bitches” and “Spicy.” 2NE1 received cheers from fans while delivering their trademark choreography, as seen on a snippet of the show on Coachella’s Twitter page, also today.

Watch the @YouTube livestream for more surprises from the desert https://t.co/369m1pEHng pic.twitter.com/R40ntMdx5L

Although the members have been reuniting for personal occasions, this marks their first live performance together since Mnet Asian Music Awards (MAMA) in 2015. Fans were obviously thrilled at the reunion, making “2NE1” the top trending topic on Twitter with over a million tweets, as of writing.

2Ne1 debuted under YG Entertainment in 2009 and officially disbanded in 2016. They are the first K-pop girl group to have embarked on a world tour. JB