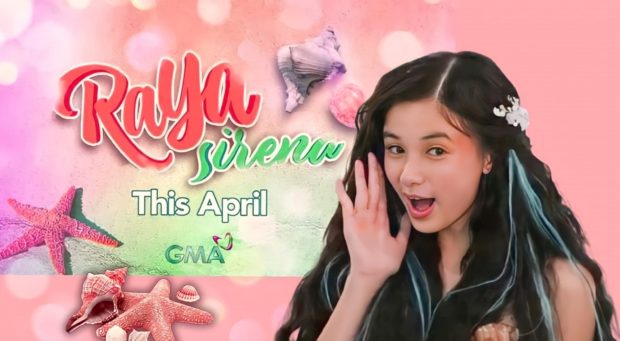 The decision to make a miniseries out of “Raya Sirena,” headlined by the GMA Network onscreen tandem (“Team Jolly”) of Sofia Pablo and Allen Ansay, is smart and logical, because it was one of the very first episodes of “Regal Studio Presents” and turned out to be one of its highest-rating episodes. In fact, many still watch the clips of it and talk about it on social media.

Indeed, “Regal Studio Presents” (RSP) has become a gold mine of one-off, self-contained episodes from the multi-genre series with the potential to become their own miniseries or a series of its own because each episode is entirely unique.

“Raya Sirena” will belong to the fantasy romance genre with a bit of humor in it. The format of the series “Regal Studio Presents” being a non-traditional take is one reason why I believe it has been a hit with viewers at home. The second reason is the ever-changing casting choices made for each episode, which gives viewers something to look forward to in terms of their anticipation, in seeing their favorite actors, and discovering new faces likewise, onscreen. The third reason is that the genre of what the episode will be is unpredictable and follows no certain or specific category.

The concept of such a non-traditional show has proven to be a favorite among the actors, writers, directors and most of all, the viewers at home.

In many ways, “Regal Studio Presents” allows everyone involved to have fun, be experimental and let loose. You are virtually guaranteed episodes that do not generally conform to the standard and instead go beyond the expected most of the time. Truly, the formula of having no fixed formula has been a resounding success for “Regal Studio Presents.” Expect the unexpected from RSP.

Now, here comes “Raya Sirena” as RSP’s first miniseries. The theme revolves around mermaids that belong to the realm of fantasy. Mix in romance and a bit of comedy into the formula, and you come up with a winner. Mind you, mermaids remain to be enchanting, fascinating and magical creatures which capture every little girl’s imagination. She dreams of being a mermaid. She continues to be enthralled by these enchanting mythical creatures all the way to her young adulthood. Watching “Raya Sirena” will be a wish come true at last, in a vicarious way, for her.

And let’s be honest here, has not every man at one point in his young adulthood or mature years, been perplexed by all the fuss and fascination with mermaids, or even laughed at the ludicrous thought of these mythical creatures? Let him watch “Raya Sirena” and his doubting mind will continue to remain in that state. Because there are no answers to mysteries.

Watch out for “Regal Babies” Jana Francine and Mika Reins. They will bring youthful energy, enthusiasm and joy to “Raya Sirena.” In my opinion, both young actresses are born to be stars that are finally getting their chance to make a splash.

“Raya Sirena” is directed by Crisanto B. Aquino and produced by Regal Entertainment, Inc.

“Raya Sirena” as a miniseries is ready to make a huge splash on GMA Network before the month of April ends. Let’s swim for it.