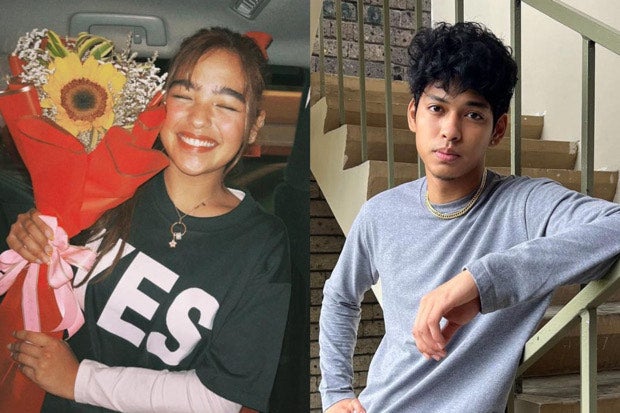 Andrea Brillantes is now officially in a relationship with actor-basketball player Ricci Rivero as she said yes to a surprise proposal he made to her, after his University Athletic Association of the Philippines (UAAP) game yesterday, April 9.

A snippet of the proposal was posted by one fan account “nowhere to go but UP” on its Facebook page, also yesterday. Rivero, who plays for the University of the Philippines (UP), can be seen asking Brillantes to be his girlfriend over the microphone in the announcers area. Brillantes, who was in the bleachers, then gave her answer by grabbing a shirt with the word “yes” printed on it, to which Rivero replied “I love you” before heading out the court.

Brillantes then showed herself wearing the “yes” shirt while holding a sunflower bouquet, via her Facebook page.

“First time kong manood ng UAAP di ko inaasahang mag kaka-boyfriend pa ako. Grabe naman yun Lord!” she said, adding the date “04.09.22.” (It was my first time to watch a UAAP game and I did not expect that I would have a boyfriend [there]. That was amazing, Lord!)

Speculations that Brillantes and Rivero are dating recently arose after the two were reportedly spotted together in a restaurant in Taguig. Brillantes was also seen wearing a UP Fighting Maroons jersey with the number 25, which also happens to be Rivero’s jersey number.

Brillantes earlier hit the headlines with her fellow Gold Squad member Francine Diaz, with fans speculating that there is brewing tension between the actresses. This was when fans noticed that the two unfollowed each other on Instagram after Seth Fedelin, Brillantes’ onscreen love team partner, was spotted spending time with Diaz’s family. Speculations that Diaz was courted by Fedelin also arose but it was later dismissed by the actress’ talent manager John Ling.