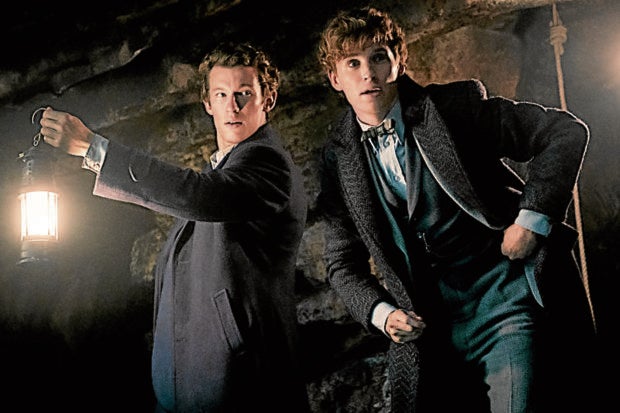 You don’t have to be a fan of the Wizarding World to appreciate the merits of “Fantastic Beasts: The Secrets of Dumbledore” as a stand-alone film. The third and most cogently limned installment in the “Fantastic Beasts” series, which will open in Philippine theaters on April 16 (Black Saturday), has as much crowd-drawing appeal as it has urgently prescient themes working pertinently in its favor.

With the birth of the mythical, antelope-like Qilin, which is gorgeously brought to life by the film’s special-effects experts, the movie even manages to incorporate scenes involving candidates for the top leadership in the International Confederation of Wizards, mirroring the country’s current climate of doom-and-gloom as good governance and democracy hang in the balance.

At the heart of the third film’s conflict is the imminent rise of political despots who are thrust into the highest positions of power and authority by way of historical revisionism, mind manipulation and fake news. That alone makes the film a must-see for viewers who are deeply invested in the quest of truth.

At the global press con that Inquirer Entertainment attended recently, there was a lot of talk about family and the different ties that bind the characters and creatures in JK Rowling’s Wizarding World.

Inhabiting this alternate reality is young Albus Dumbledore (Jude Law), along with the small band of wizards, witches, muggles and “fantastic beasts”—led by magizoologist Newt Scamander (Eddie Redmayne)—that the Hogwarts professor has gathered to help foil the sinister plans of dark wizard Gellert Grindelwald (Mads Mikkelsen, transfixing in the role essayed by Johnny Depp in 2018’s “The Crimes of Grindelwald”).

All these magical characters are once again brought to ebullient and spellbinding life by director David Yates and his team in “The Secrets of Dumbledore,” the 11th movie in the entire Wizarding World series.

If the sight of bowtruckles, nifflers, demiguises, erumpents and billywigs eventually overstays its welcome for less attentive viewers, the production’s likable characters, as well as their fractured relationships with the people they love, are guaranteed to keep you hooked from start to finish.

The most significant of the strained or severed ties in this tale is without a doubt the ill-fated love story between Dumbledore and Grindelwald—a bitter and painful parting that leads to deadly and damaging consequences.

Just as astutely explored in the movie are the relationships of Jacob Kowalski (Dan Fogler) and his ex Queenie Goldstein (Alison Sudol), Aberforth Dumbledore (Richard Coyle) and his vengeful estranged son Aurelius Dumbledore, and Newt’s bonds with his brother Theseus (the dashing Callum Turner), American witch Lally Hicks (Jessica Williams), French wizard Yusuf Kama (William Nadylam), and Newt’s assistant Bunty (Victoria Yeates). Each of them is as much a “fantastic beast” as the next. 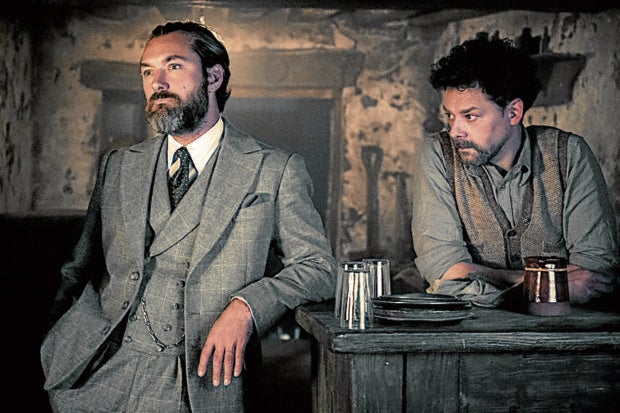 Jude Law (left) and Richard Coyle in “Fantastic Beasts: The Secrets of Dumbledore”

At the press con, the cast was also joined by director David Yates and producers David Heyman and Tim Lewis.

Aside from its unabashedly fantastical elements, “The Secrets of Dumbledore’s” emotional core is even more crucial this time around.

“So, going into this experience with people you respect and admire, and with ones who can also take the strain of it with some real humor and dignity is essential. Those are the qualities I found in many of the people I work with in front of the camera and behind it.

“If I look back at those seven films, it’s a very fond memory of the wonderfully creative people I’ve worked with across all of them. And that ‘sense of family’—yes, we use that line quite a bit—is important. That doesn’t always happen in our industry, because it’s a tough business. What’s enduring about these movies is that they become a safe place to go to for lots of people.”

“These films celebrate certain values, like loyalty, love and friendship. They empower the ‘outsiders and outcasts’ in our midst … the persons you always underestimate, so that’s how it resonates with a lot of people in the real world, and they do it in this magical space!

“Our previous film was quite complicated for all of us, plot-wise … and it took us a while to figure that one out. So with this story in particular, we wanted it to not only be emotional, but also enjoyable—we wanted it to be a real treat. So we leaned into the values of the early Potter films that had whimsy, charm, humor and humanity.”

For Jude, playing Dumbledore—a character that has been with the series since the Wizarding World was launched about two decades ago—was more like a “process of regression” than a “process of change.”

“One of the joys of portraying the character is the fact that David really allowed me to investigate, rather than feeling the weight of the brilliant performances turned in Michael Gambon and Richard Harris as Dumbledore in those early films,” Jude stated. “He’s not [yet] the fully formed Dumbledore of the ‘Harry Potter’ books and films. He’s a man still finding his way, still confronting and resolving his demons.

“And that’s what I mean by regression. In this film particularly, he’s facing the past, he’s facing himself and his own guilt. But if there were a quality that links him to those played by these brilliant actors, it would be his mischievousness and humor.

“Dumbledore sees the positive in people, just like the way that he believed in Draco or even in Tom Riddle. He sees the potential for goodness in them—and that’s something that he’s always had.”

What appealed to Jude about diving into Albus’ history?

“I mean, it was a no-brainer,” Jude said, chuckling. “I felt like I’d been in preparation for the role subconsciously from the minute I started reading the books to my children. There’s just so much in the character to mine or investigate as an actor—and that’s before you even get into this extraordinary world of magic! That’s just Dumbledore as a human. Although the magic is really fun, too (laughs).

“In terms of establishing rapport with Mads, a lot of it was just sharing our personal perspectives on how Albus and Gellert met and what that meant to both of them. To me, it was important to think of who Albus was before he met Gellert. I always imagined that being Dumbledore was actually quite a lonely place, because he was outstanding even at a very young age … to the point where he probably felt slightly isolated.

“Then suddenly, Albus meets someone who is as brilliant and matches him and inspires him—that kind of connection is very, very powerful. It’s important to remember that their time together must have been incredibly dynamic, cherished and special. Then, this awful moment comes where you realize you’re on different paths, and you move away from each other!”

Mads said that Grindelwald’s dilemma is just as complex because his character is very much linked to Dumbledore.

“Jude and I had quite a few conversations about what that relationship looked like, so my character is shaped out of that world,” Mads admitted. “As far as balancing Gellert’s menacing behavior with his charm, you don’t really start out saying, ‘I’m going to be the bad guy here,’ right?

“So we had to figure out what Gellert’s goal was. Why is he trying to ‘make the world a better place’ in that manner? They start out having a mutual goal as young adults, then things get blurry. Their ways of getting to that goal are far different from what they originally imagined.”

In contrast, Dumbledore’s evolving relationship with Newt has had a more or less pleasant progression.

“I love the Newt-Dumbledore relationship,” said Eddie. “What I love about it is that it’s got that master-and-apprentice complexity. But it has since evolved throughout the movies and has become almost fraternal, like an older brother-younger brother sort of thing.

“There’s a moment in this film where Newt even takes it upon himself when he sees the vulnerability in Dumbledore and tries to pass on a moment of wisdom to him. So, that progression.

“What I love about Newt fundamentally is that he’s an introverted guy. But Dumbledore has seen his potential for leadership, albeit an unconventional way. As for this film, it’s like a wizarding heist movie in which this group of outsiders all band together—and there’s a kind of wonder in that.

“I adore Newt. There are many things that I love about him. He’s an incredibly empathetic person who is very happy in his own company and in the company of creatures. He is someone who enjoys silence.

“There’s something that Newt says to Dumbledore in the film, which I adore. He tells him that we all make mistakes in life, but we can always try and make things better. And it’s the trying that counts.” INQ